This weekend Focus on the Family Plans plans on running a Pro-Life advertisement during the super bowl.  From the moment that this was discovered, it received national attention.  Groups like NOW and the feminist blogosphere waged a real effort to challenge this threat to women’s reproductive rights.  The Center for Reproductive Rights wrote a letter to CBS pointing out that Ms. Tebow lived in the Philippines at the time of her supposed choice and therefore her only real option was to have the baby because abortion was and still is illegal there.

At the same time that this battle is being waged, another is going quite unnoticed.  An anti-abortion group in Atlanta is targeting Black women by putting up billboards stating that Black children are an endangered species. 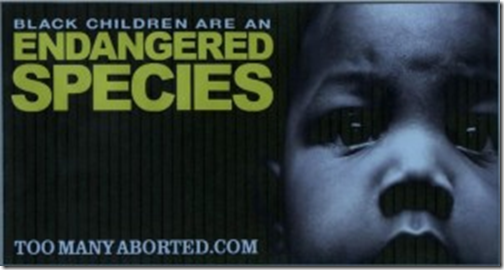 As proof of this claim they offer the fact that Blacks account for 30% of the general population and 56% of the abortions. When we consider the fact that Black children are universally devalued, this campaign has the possibility of being really effective.  Over the last two years campaigns specifically targeting the ability of Black women to choose have been on the rise and yet there has been little to no commentary from White feminists regarding this issue and so I ask, whose reproductive rights matter?

These organizations repeatedly point to the fact that Margaret Sanger was a eugenicist and it seems that rather than countering this claim with the fact that Faye Wattleton, an African American woman was president of Planned Parenthood from 1978–1992, there has been a resounding silence.  Is Planned Parenthood suddenly not worth defending when it is about Black women having abortions?  It seems to me that highlighting a former Black president would go a long way to fighting the claims of racism.

How about the fact that Black women are impoverished due to racism and sexism?  We already know that a woman living alone with a child is more likely to be poor and therefore when we factor in racism, it is quite obvious that poverty would increase.   Would it really be so hard to suggest that part of the reason that the rate of abortion is so high is because Black women are already aware of the herculean task and are simply opting out due to a lack of community support and government funding?

Another factor to consider is education. The way to stop abortion is not by outlawing it but by ensuring that sex education is offered from an early age.  We already know that schools which are located in impoverished neighbourhoods fall short in terms of education.  Is it not possible to suggest a co-relation between this fact and a lack of good sex education?

I do understand that some White women may be reticent to enter this debate because it is framed as saving a Black child, who we know to be universally undereducated and invisible. Even when Black women place their children for adoption, they are less likely to be adopted and so it would appear that Black women are really reduced to two choices, abort or raise the child themselves.  Even if we validate that point, there is still the issue of placing a priority on women's agency when it comes to reproductive rights.  We do not have the right to question these women on their decisions.  No one chooses to abort without putting great thought into the matter and if we truly respect the right to choose, it must apply to ALL women.

Finally, as scared as White women may be to interact because of the racial undertones of this argument, I must ask don’t Black women matter?  All of these campaigns revolve around saving the Black child and this is predicated on the idea that the child is infinitely more valuable than the mother.  If abortion were to be outlawed tomorrow, more children may indeed be born, however you would also see a rise in the deaths of Black women due to back alley abortions.  The Black woman has a right to life and this must be forcefully asserted.

I will continue to blog about this issue because I believe that choice applies to all women but  I must ask where are the voices of my white sisters in arms?  If you truly believe in choice, it is irresponsible to ignore the ways in which Black women’s reproductive rights are increasingly being challenged. The issue is that you either do not care enough to sound the battle alarm or that race is once again a sphere in which you are unwilling to engage because of a desire to center the concerns of White women.  Here’s an idea for you to chew on, if abortion was ever revoked it wouldn’t apply solely to Black women, it would restrict your rights as well.  I suppose that some of you may have the capitol to travel to Canada or Mexico to assert your choice, but invariably some of you would find yourselves in the same alley as a Black woman.