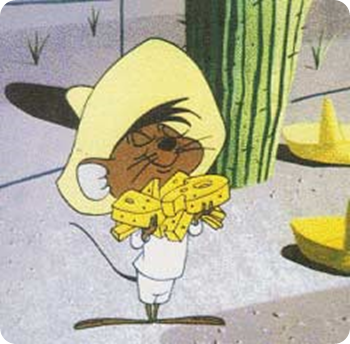 Speedy Gonzales is a 1950’s Warner Brother’s Looney Tunes cartoon.  The speedy mouse was removed from the air by the cartoon network in 90’s because of fears that it unfairly stereotyped Mexicans; however, after a campaign to get the mouse returned to the air, Speedy made his reappearance in 2002. New Line producers intend to update Speedy’s image, in a way that they contend will remove the problematic racial elements.

"We wanted to make sure that it was not the Speedy of the 1950s -- the racist Speedy," Ann Lopez said with a chuckle. "Speedy's going to be a misunderstood boy who comes from a family that works in a very meticulous setting, and he's a little too fast for what they do. He makes a mess of that. So he has to go out in the world to find what he's good at."

Many of cartoon shorts that featured the little mouse are filled with highly racist and xenophobic messages. 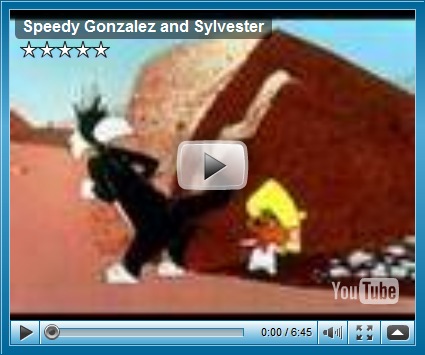 There are admittedly a percentage of the Mexican community that support and embrace Speedy Gonzales; however, it is possible to suggest that representation of Mexicans in the social discourse and even more specifically the media, has been so severely limited that it has lead to support of Speedy.  There are many that feel a bad representation is better than none.

Speedy and his little entourage often portray slovenliness, drunkenness, and laziness.  Many of the shorts place him and his entourage in direct confrontation with Whiteness and America.  Speedy regularly crosses the border, evading guards in the form of Sylvester et al,. and  this clearly matches the modern meme of all Mexicans supposedly seeking access to the states to take commodities, jobs etc.,

Though Speedy is sometimes understood as fighting against injustice, this depends on who is watching the cartoon and their understanding of Mexican bodies.   Nowhere in the cartoon does Warner Brothers attempt to interrogate the crimes committed by the U.S. that are directly responsible for the disparity.

Even though Speedy is getting a makeover, once a label or in this case an image has been firmly understood in a negative matter, reclamation or in this case re-typing will not alter the original concept. This redesign will only further ensconce the racist tropes that Speedy presents in the mind of the viewer because the two will be irrevocably attached. No matter how much we wish to disempower an image or a label that is harmful, its continued existence only serves as marker of our desire to “other”. It is further important to note that though George Lopez has been contracted to play the title character, one man cannot legitimize how an entire group of people is represented.

A more affirming project would be to create a new cartoon featuring a Mexican character.  Do we really need to continue with the idea that Latino’s can only be portrayed by chihuahuas and mice?  Even if we were to remove every single racist trope in the Speedy cartoons, the fact that a Mexican can be represented by a mouse/vermin is extremely racist.  This new cartoon will be aimed at children and they will add this construction to that which already proliferates media representations of Mexicans, causing yet another generation to conceptualize Mexicans as “other”.

Aiming racist stereotypes at children is scurrilous because they accept without question the world around them, unless they are specifically taught to look for racism and privilege. We must also concern ourselves with how such representation will effect Mexican and indeed all Latino children.  If the only time they see themselves represented it is in the position of the other, what are they to conclude but that they are without value?  Speedy Gonzales may seem sweet and harmless, but the cost of his continued existence is another generation children believing that Mexicans are secondary beings.