Judge Joe Brown and the Shaming of Black People

One of my very bad habits is watching reality television.  Between two and four pm each day the baby goes for his nap and I watch “The People’s Court”, “Judge Mathis”, “Judge Alex” and “Judge Joe Brown”.  I flip back and forth, watching the cases that interest me.  After watching several episodes of “Judge Joe”, I could not help but notice a disturbing trend: the constant shaming of Black people. 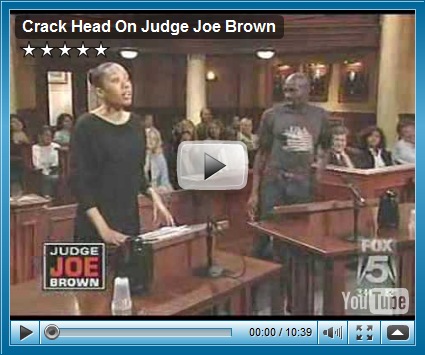 In the above episode we have a man admitting to selling meth.  He is the father of several children that he cannot support and has a lengthy criminal record.  If that were not enough, he also appears to be under the influence.  At one point in the proceeding he breaks down in tears and is clearly emotionally unstable. 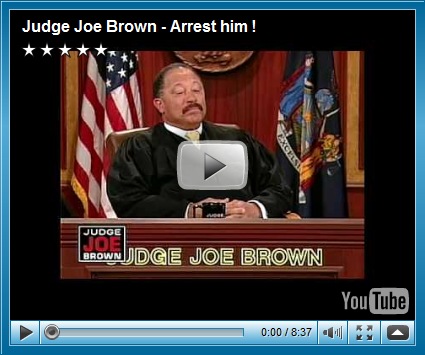 4:10 Keep quiet and I will tell you what you lookin like and why I made that comment.  You see what I used to see was when there was a man  standing at the podium what he was doing was behaving in a certain way and I saw the young ladies and they would act in a certain way and what’s interesting is over the last twelve years I’ve been doing this particular arbitration thing I’m doing right now and considering the twenty years that I’ve done this before, I have noticed an interesting transition: the boys are starting to act like the girls used to in terms of their body language, rolling their eyes, head up, hand on hip moving around.  Women since time immoral have talked over someone who is trying to address them and you are talking over me just like you are a woman.  When you starting acting like one, moving like one , sounding like one them I’m going to put it out there.

When he is not arbitrating cases in which Black people can be constructed as thieves, prostitutes, irresponsible parents and drug addicts, he resorts to shaming them before they can even present their side of an argument. Homophobia, sexism, and classism are his stock in trade and with these tools he claims to be “protecting womanhood and uplifting manhood.”

Judge Joe Brown seeks ratings like any other show on television; however, the fact that he continually stoops to the lowest common denominator is indeed a problem. When we factor in that he represents the law, which has very much institutionalized racism, his performance  indeed reifies why why a Black face is not necessarily a friendly face.  Here we have a Black man openly shaming Black people in a system that has proven to be prejudicial to the point of death.

For far to many Blacks of class privilege, power  is often manifested by shaming members of the community that are uneducated and poor because they are afraid that their Blackness will cause them to be related to them in the mind of others.  Judge Joe is constantly shaming people for being uneducated without considering the road blocks that are placed by the system to ensure that people remain ignorant. There are teenagers graduating with 3.0 average from inner city schools that will have trouble acclimating to the first year of college because they were not taught the skill set required.

Whenever the opportunity to arrives to slut shame a woman he makes it his priority.  These women stand in front of him for less than 20 minutes, but based on the number of children or the men that they are involved with, he makes snap judgements about their moral fibre.  This isn’t justice, it’s about enforcing social discipline on people at every turn.

Judge Joe Brown is a tool of the system and he is a tool of Whiteness.  It has always been easier for a ruling group to maintain control by convincing members of the out group to police themselves in a way that benefits the oppressor.  His behaviour serves two purposes: as an authority figure he is able to punish those that refuse or are unable to comply to norms and as a racialized body he allows Whiteness to claim that because there are Blacks in positions of power, that the system is no longer biased.  He is a marionette whose strings are constantly being pulled.

I believe that Judge Joe has a choice as to what his show will entail.  He could choose to promote the good in the way that Judge Milan does, or he can be ringmaster of a revamped “Jerry Springer Show”.  When coin and praise are heaped upon a marginalized body they often lose contact with the community of origin, thus allowing the person to believe that they are beyond the stigmatization that other POC face.  It seems to me that it is time for Judge Joe to try and hail a cab without his robes and gavel because then and only then will he figure out that his power only goes so far.