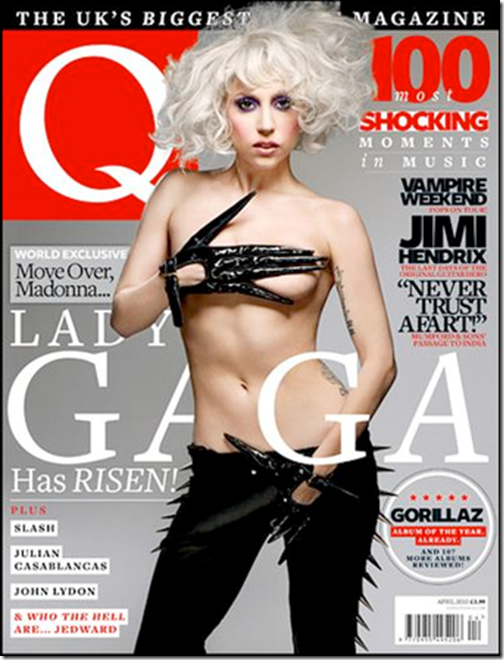 There has been constant media speculation regarding Lady GaGa’s genitalia.  This month Lady GaGa has decided to grace the cover of Q magazine with a faux bulge in her pants.

The Sun quotes GaGa as saying:

"We all know that one of the biggest talking points of the year was that I have a d***, so why not give them what they want?

"When a guy says, 'Oh I f***** all these chicks this week,' there's a high-five and giggling. But when a woman does it and its publicised or she's open about her sexuality or she's free or liberated, it's, 'Oh, she must have a d***.”

Even though she has posed for this photo, people will not stop speculating about Lady GaGa because in so doing it disciplines not only her but all women.  Part of the issue with Lady GaGa is that she does not conform to social norms.  Women who refuse to be good girls and flout their agency and sexuality, are always viewed as a threat and this is why patriarchy has so much invested in shaming women akin to Lady GaGa.

The very idea that GaGa rightfully views herself as an independent person is enough for many to cast aspersions regarding her gender.  Violating the gender binary in any way is always threatening.  Despite our supposed freedom, we have socially decided that some characteristics are feminine and others are masculine; that this is limiting to the individual is not considered and all are expected to perform their gender at all times.  Women who are viewed as aggressive or sexually independent are constructed as men because we view these to be masculine traits.  This kind of limited understanding of gender harms both men and women, though we claim it is based on nature.

Lady GaGa is about fluidity and self determination.  Many will look at her fame and her bank balance and declare that she cannot be oppressed; however, this can only be understood as true if we agree that class privilege out ranks gender based oppression.  GaGa’s fame and wealth will indeed negate the overall impact of sexism but this does not mean that she is not effected by it.  It further does not take into account how the sexism aimed at Lady GaGa effects other women.  Can we really state that oppression does not matter because a person has privilege in another area? If this is the case then no one is ever truly oppressed because each of us lives with some form of privilege.

Would the above image even have occurred had speculation regarding Lady GaGa’s genitalia not been the topic of conversation for over year?  The fact that she felt that the need to respond is proof of the fact that sexism acted upon her.  We are always under a disciplinary gaze and no matter how privileged a person like lady GaGa is, we are constantly reacting to the world around us.