Lady GaGa’s Vagina Is Not Your Business 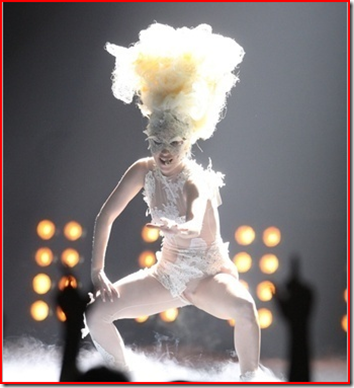 Since Lady GaGa became the shiny new thing, the media has repeatedly suggested that she may be a man.  There has been a consistent attempt to get a peek at her vulva because the world just needs to know. Brian Moylen of Gawker, took the time to magnify the above image to see if he could discern a vagina.  In the end, he declared it a prosthetic vagina and suggested that she is indeed hiding a penis.

Not content with vagina scouting, he then linked to a post entitled, “Lady GaGa’s Sloppy Cellulite Ass and Thick Pussy of the day”(Note: I refuse to link).  Does such spew really need to see the light of day? The author did declare Lady GaGa’s vagina authentic; however, ze spent the rest of the post engaging in transphobia, slut shaming, and fat shaming.  Well at least Moylen is presenting differing points of view on the whole vagina debate right?

Due to her fame Lady GaGa is under a tremendous amount of scrutiny. She refuses to conform in a world that prizes automatons and this is even more unforgiveable because she dares to do so as female.  I am not going to get into the debate about whether or not Lady GaGa is cisgender because it is irrelevant.  Even if she had a 20 inch penis, it would not matter because she clearly identifies as female and no more need be said on this issue.

The whole debate on Lady GaGa’s genitalia is just an excuse to engage in transphobia.  It is an old and tired meme that bigots repeatedly engage in.  Every time that a woman becomes successful, bigots engage in transphobia in order to shame and discipline her.  This line of thought really only works if you consider trans people to be disgusting.  If a woman is tall, butch or even appears to be slightly gender ambiguous, you can bet that it will be a New York minute before commentators decide to engage in transphobia.  GaGa is a performance artist; love her or hate her but how about if just for the sake of decency (yes a rare commodity in this age) we stop speculating on what is between her legs.