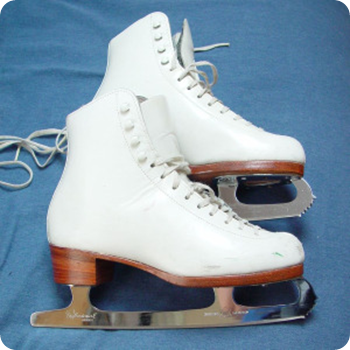 Figure skating continues to be a contentious event at the Olympics, even though a new scoring system has been implemented.  There will always be those who question the scoring but when critique is based on homophobia and sexism, clearly the debate has reached a level that needs to be discussed.

In an interview with Salon, three time world medal champion Elvis Stojko, made clear that the greatest danger to figure skating is the feminization of male skaters.

It basically started about one year ago, when Skate Canada said that they weren't getting enough young boys enrolling in skating. People tiptoe around the topic, and I was like, "You know, I'm just going to say it: Effeminate men's skating is not my style of skating. In men’s skating I like to see power and strength."

Effeminate men’s skating is the issue with male figure skating.  WOW…Of course Elvis believes that it is only right for people to get upset if they are called gay.

Some guys get into the sport because it's difficult — the spins, the speed — and they like to showcase that within the music. When you're not appreciated for that, it takes its toll. And then when people call them effeminate, they get pissed. People call them gay, and some people don’t like to be called that.

If you want to open up figure skating to another audience, you need to create something that's going to allow everyone to watch. If you have a male masculine person watching it, they need something to relate to. Other guys relate to Johnny Weir’s thing. You need to have guys doing jumps, so a person who also watches NASCAR can identify with it and say, "Hey that's awesome — how many rotations is that?" or "How fast did he spin?" instead of, "How pretty was that guy?"

Being called gay can only be a bad thing if you have a problem with homosexuality to begin with.  Why should it be considered threatening to anyone's masculinity?  He makes it sound as though gay men are destroying the sport by not being suitably butch.  Don’t even bother to get upset about his commentary because gay people need to just accept their second class status, according to Elvis.

People in the gay community have to realize they’ve got to take themselves out of it. It's not against anybody. I've been getting heat for this, but there are people behind me saying that they appreciate it. It's about what people can identify with when they're watching the sport. It doesn’t have anything to do with gayness. Effeminate men can identify with effeminate skating. Masculine men can't identify with that. When I watch it, I can't identify because I don't move like that. My consciousness doesn't feel like that.

Of course there are people supporting what Elvis has to say, it takes no leap to understand the support when it is a well known fact that despite legalizing same sex marriage, Canada continues to be a heterosexist society. I have spoken with many gay and lesbian activist in the US regarding their aspirations for same gender marriage only to repeatedly point out that marriage will not bring the social acceptance that they are seeking.  Canada serves as model of the ways in which institutionalized heterosexism can still flourish in a society that approves of same gender marriage.

As a skater, Elvis wants to ensure that he is able to take advantage of his heterosexual privilege.  Rather than using this as an opportunity to raise awareness about the ways in which bodies are stigmatized for being understood as gay, he chose to infer that gay males should simple closet themselves and or leave the sport altogether.  Its the same old refrain, for the greater good the marginalized body is expected to be invisible.  It never occurred to Elvis that there are young gay males that are watching skaters like Johnny Weir, with excitement.  They need role models to.  They need to know that they are talented and have much to contribute.

I further find it interesting that he refers to sports like nascar and hockey as though there are no gay athletes in those sports.  It is the culture of heterosexism that causes many gay athletes to remain closeted but that does not mean that they are not actively participating in all sports.  Athletes like Johnny Weir are important to sport in general because his example teaches young people that their sexuality has nothing to do with their ability to compete on a world class level.

Unfortunately, Elvis is not the only person to cast aspirations of gay male figure skaters.  Quebec sports casters Claude Mailhot and Alain Goldberg kicked down the door that Elvis opened:

"This may not be politically correct," Mailhot said during the segment, in which Weir, known for his extravagant performances and fashion flair, was shown sporting a semi-sheer, pink-and-black costume he designed himself. "But do you think he lost points due to his costume and his body language?"

Goldberg replied that Weir's feminine style may reflect badly on other male figure skaters. "They'll think all the boys who skate will end up like him," he said. "It sets a bad example."

In earlier RDS coverage of Weir, Goldberg and Mailhot also brought up South African runner Caster Semenya, who was forced to undergo gender testing following her 2009 win at the world track and field championships in Germany.

"We should make him (Weir) pass a gender test at this point," Goldberg said and Mailhot then jokingly suggested Weir should compete in the women's competition.

They have since offered an apology for their statements; however, the fact that they made the aforementioned comments in the first place really speaks to the ways in which homosexuality is very much still considered a stigmatized identity in Canada. They are using figure skating as a foil in order to protect undeserved heterosexual privilege.  One is always able to find a reason to engage in bigotry, if the goal is to maintain a hierarchy of bodies. What we can learn from all of this is that though marriage is legal in Canada, it is not the end of the struggle for the GLBT community.

We should also take the time to interrogate the sexism in the arguments presented by both Elvis and the sports casters.   As much as their arguments present to be about homosexuality, there is also an air of sexism because male athletes are being attacked for presenting as too feminine.  If we respected women or even believed in the idea that women are equal in all spheres, then a feminine presentation would also be unproblematic.

Women in figure skating are not viewed as athletes much the same way that all of women’s sports is regularly understood as secondary to celebrate men’s sports.   If we have a chance at a gold medal in hockey this year, it will be with Canada’s women and yet that is regularly cast aside to fixate on how the men are doing.  Women train for years to represent their country and their dedication and skill level is no less than male athletes.

Gender is a fluid identity and yet we are dedicated to the understanding of male/female as immutable categories because it presents the opportunity to engage in patriarchal oppression.  There is much good to be gained from participating in sports; however, that should not cause us to ignore the ways in which sports institutionalizes sexism and homophobia.  In fact, because much of traditional sports is a bastion of straight, cis gender masculinity, it needs to be vigorously interrogated.  It is not just the agony of defeat and the thrill of a win, in many cases it amounts to the normalization of bodies that are already steeped in privilege and therefore, with every cheer we are also supporting a social grouping that marginalizes many.