Nadaya Suleman Is Not Done Having Babies

Ms. Suleman recently made an appearance on “The View” where she was grilled by the ladies.  I was not  able to see the interview; however, I did catch the disturbing analysis of the interview on CNN. 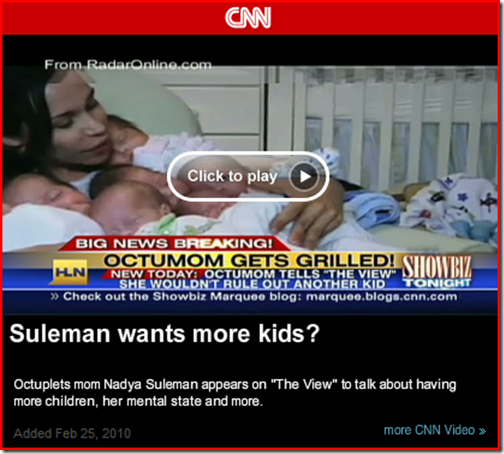 The video begins with Nadaya stating that she is done having kids unless someday far in the future she falls in love and meets someone who would like to have another.  She made it clear that she did not want any more children by herself but would not close the door to having more children in a committed relationship.

Leslie Marshall @ :52 :  You know if we can’t lock her up, how about we lock up her uterus.  (emphasis mine) I mean seriously, I’m just thinking that a guy is gonna be like look I love you I want all of these children and now let’s make more.  Again how do you pay for all of these kids?  I don’t know if she just said that to be so provocative, she wasn’t thinking or she’s really believing the Cinderella,  snow white, prince and the castle, forgetting all of the kids she already has. I think she clearly needs more help.

Because the subject matter was Ms.Suleman, these women felt that it was acceptable to question a woman’s reproduction.  Though the commentary regarding locking up her uterus was meant as a form of sarcasm, the reality is that Leslie was openly advocating for forced sterilization.  When we consider that the U.S. already has a history of violating women's bodies through forced medical procedures, this is indeed truly disturbing.  The issue is that Leslie disagrees with Ms. Suleman’s reproductive choices and therefore, she has taken it upon herself to sit in judgement, without realizing that once we begin to question the right of a woman to have children, we place the state and society as the ultimate adjudicator of women's bodies, thereby removing individual agency.

Brooke @ 1:22: I think she needs to take a step back and look at what she’s saying objectively and realize this is not in her best interest,  the best interest of her fourteen children or taxpayers, speaking of how she’s paying for a lot of it.  Meaghan I think that the octomom needs to get a grip.

Repeatedly in conversations about Ms. Suleman’s reproduction the issue of how the family is being financed becomes an issue.  Financially supporting these fourteen children is not going to amount to even 1% of a state budget, never mind the miniscule impact it will have on the federal level.   Tax payers repeatedly pay for government programs that they don’t necessarily agree with and receive very little return on their investment.  These fourteen children will grow to actively participate in society and given the right support, their ability to contribute is limitless.  Supporting children is the best return that any state can possibly make.  Human capitol is an extremely important factor in any economy; it is only because we have so devalued the individual to support corporate capitalism that this is so easily ignored.

Leslie Marshall @ 3:22: What do they say a lot of people have to do first when it comes to any kind of mental illness or an addiction – is admit.  And this is a woman, clearly in denial about how many issues she might have mentally and emotionally because obviously you have issues to want this much and need this much attention, unconditional love for that many children uh etcetera.  ‘Cause she said she would be drowning but I think she is drowning to a degree, if nothing else financially.

Once again we see another dangerous trope.  The ability of women who are disabled to parent has constantly been up for social debate.  The U.S. also has a history of sterilizing disabled mothers and or removing children from their care.  Ms.Marshall is making judgements based on one interview and a few sound bites regarding Nadya’s mental health and this reveals a high degree of able bodied privilege.

Note that once again money is raised in the conversation.  Ms. Suleman’s class standing has no bearing on her mental competency; however, a spurious link is created to once again validated the right to discipline her.  How many children can a woman have before her mental state is called into question and who gets to decide?

What makes this conversation so troubling is that you have three women of race, class and able bodied privilege repeating many of the same harmful social constructions that have left many women vulnerable to shaming and medical harm.  They take the position that they do because they cannot envision that someone could potentially apply the same arguments to them and their reproductive decisions.  When we separate ourselves from women and declare ourselves superior based on some form of perceived privilege, we are opening ourselves to attack and thereby potentially reducing the rights of all women.

Throughout the conversation these women engaged in sexism and ableism.  Yes, women can be sexist because just like men that have internalized patriarchal values.  Women of privilege long ago learned to parrot dominant discourse, even though it marginalizes other women because they count on their privilege to make them exempt from attack.

Like any other ruling force, patriarchy needs the co-operation of the oppressed to maintain its position and that is why when women parrot the nonsense that these three did they are given a platform and presented as though their thoughts and ideas are definitive of an issue.  The oppressor will always give voice to those that collude with their own oppression.  You can see this pattern repeatedly in women who argue for the reduction of women's rights and POC who declare an incident to be free of racism to benefit Whiteness.

It is this collusion that stops us from banding together to create substantive change.  Instead of focusing on the oppressor, we find ourselves engaged in conversation with each other.  Even if I were to spend my last breathe proving these women wrong, no change will have occurred because they were the focus of conversation, rather than patriarchy whose sole purpose is to maintain women as colonized bodies.

The question then becomes at what point do we end fighting with marionettes to focus on the root of the oppression? Bait and switch is a tactic that patriarchy has invented and it is time we start to focus on solidarity because without that our grand daughters will be having this very conversation.  Perhaps we should ask these women as they sit at the table of plenty where their solidarity lies because when we allow them to frame the conversation, we are only giving voice to the oppressor.