Nelson Mandela: Whose Hero Is He? 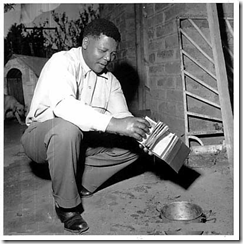 February 11th marked the twentieth anniversary of Nelson Mandela’s release from Robin Island.   Twitter was filled with his quotes and praise for what a wonderful forgiving soul that he is.  In his lifetime Mandela has been transformed from a simple man, to a near God like figure who we consider to be above question.

His fight against apartheid and wrongful imprisonment has sparked hope in millions of people.  The mythos surrounding Mandela is such that to question any of his actions is not permissible.   That he is a man, and therefore subject to the very same imperfections as every other mortal is denied in order to cement his heavenly martyr status. We are desperate to hold on to the lie that racism has been defeated and Mandela is a major key to this social myth.

Since his release from prison, South Africa has largely been governed by Blacks and a Black bourgeoisie has risen to take its place at the table.  The fact that a few have been allowed to rise is offered as proof that the evils of apartheid have been defeated and that the country has indeed begun to heal from generations of race based violence.

Mandela preaches forgiveness and he has been praised globally for not holding onto hatred in his heart.   Turn the other cheek has always made Whiteness comfortable because it is well aware of the heinous nature of its crimes against the coloured peoples of this world.  Even those that would fight for equality fear the righteous retribution of Black rage and therefore; a figure like Mandela is comforting.

Chief among his accomplishments for many was the Truth and Reconciliation Commission. In this forum Whites told Blacks of the crimes that they had committed and in this way, husbands, wives, sons and daughters finally learned exactly how their loved ones died and in some cases where their bodies were buried.  This was truth without justice and this was highly appealing to Whiteness, which has a history of rejecting accountability.

When it became clear that power was to change hands, White flight began and they quickly attempted to emigrate to any western country that would take them. What better way  to pacify the remaining White people than by letting them know that despite having to deal with Black faces in so-called positions of power, that they would never be forced to pay reparations or serve a day in prison for their actions.  Who wouldn’t hold onto that deal?

Thank goodness that Nelson Mandela arranged such a peaceful transition.  I am sure that the White people living in the suburbs in a near palatial existence, next to Blacks who continue to live in poverty and shanty towns are also full of relief.  They get to keep their  well paying jobs, big homes and Black maids.  The face of government has changed and there may be one or two Black bourgeoisie living in their posh neighbourhoods now, but essentially the social structure has not changed. In a country with an overwhelming Black majority, Whiteness has still managed to hold onto the real positions of power and this is what comes of turning the other cheek; this is what comes with forgiveness.

Mandela is a hero to many not because he spent years wrongfully being imprisoned but because he enabled the hegemony of Whiteness.  You will note that every single Black leader that has called on Blacks to embrace their anger and seek justice has been vilified, while men like Mandela receive endless praise.  Equality in name only is what Whiteness wants and such a thing  would never have occurred had they embraced a Black leader that had demanded justice.

Two hundred years from now, Whites will be telling Blacks about how apartheid was so long ago and that their failure to rise to true power is because they sabotage their community.  It will be common to hear that the systemic equality that exists is a figment of Black imagination, much like Whiteness currently preaches to the descendents of slaves in the Global North.

As a Black woman I dare to question Nelson Mandela’s decisions in his later years.  I refuse to accept a hero that has been gift wrapped and handed to me by Whiteness for palatable consumption.  My rage and my demand for justice comes from a place of loving Black people and though we have been taught not to value each other and turn the other cheek, perhaps we would be better served by questioning who this really benefits? Whiteness is directly responsible for the deaths of millions over centuries and if that is not the face of real evil then what is?