African Americans are the First Gay Couple To Marry in Washington

Angelisa Young and Sinjoyla Townsend were the first couple to marry.  They wed at the office of the Human Rights Campaign, along with two other couples. Below you will find a portion of their wedding ceremony (editors note: please grab the Kleenex before you hit play) 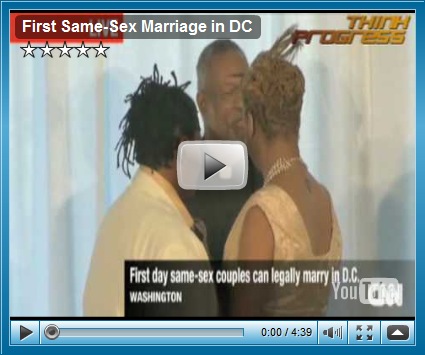 When the minister declared them partners in life, my heart swelled.  Though marriage will never end homophobia because it is institutionalized, it is beautiful to see gays and lesbians publicly avowing their love and promising faith and fidelity to one another.

I think that it is important that all see this video.  There is so much talk about homophobia in the Black community, that  those who are same gender loving, who are both gay and Black are erased.  Their stories and their truth is ignored and silenced in order to push the grand narrative.  Let their love stand as a testimony that gay rights are an issue for people of colour because Black gays and lesbians are affected by homophobia.

To those within the Black community who still see homosexuality as a White thing,  right before your eyes is the truth of the opposite.  When you support heterosexual privilege, you are oppressing your own people.  Even though the media is content  to paint the GLBT community as a monolithic group filled with race and class privilege, today stand aware that they are as diverse as any other group on the planet.  The monolithic identity is the oppressors truth and it flourishes to keep us separated from each other.

Congratulations Angelisa Young and Sinjoyla Townsend, may your love grow and blossom in the years ahead.