All Lesbians Are Redheads

Our dinner table is where we gather as a family to talk about issues and share the stresses of our day.  No subject is ever considered too taboo and we make certain that the boys are able to express themselves equally.  Last night, Destruction thought that he would educate us on a new fact that he had learned.  It seems he discovered that all lesbians have red hair.  Yep, you read that right.  Apparently, you can spot a lesbian by the colour of their hair.

When I asked where he learned this fact, he told me that the kids on the playground had told him this.  Of course they’re all experts right.  If you don’t talk to your children, someone else is more than willing to do it for you and while they are filling their heads with false information, they will also impart morals that you may not be in agreement with.

I long ago taught Destruction that there is no difference between the relationships that gays and lesbians have and what he see his father and I have.  Love is the most precious thing in the world and I have worked hard to ensure that he has come to view this as a truism.  I can say with confidence, that his discovery that all lesbians are redheads was not based in some sort of bias, but in listening to the ignorance around him

As a parent I have learned that many of the harmful isms in this world are directly taught to children and this then enables many of the inequities that are very much a part of our social world.  Time and time again I have to spend a good portion of my day teaching and guiding, so that he learns to see bigotry and hate for what it is.   I recognize this as an essential part of my job; however, I am well aware that many parents abdicate that responsibility in the belief that the world will teach their children what they need to know.

After much discussion on the topic of lesbians, I finally had to show him proof of my assertions: 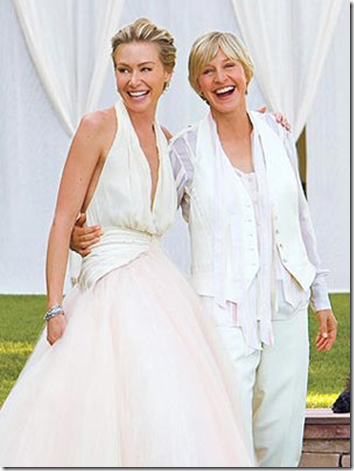 I chose this photo for very political reasons.  Not only are Helen and Portia NOT redheaded lesbians, this is a picture of their wedding day.   I wanted him to see the love between them as natural and to understand that love breaks all stereotypes, it fulfills us and sustains us.  I wanted him to see their pure joy and see how it matches the love he sees between his father and I.

Now that I think about our discussion, I think that it went rather well.  The only thing I would change is who I showed him.  You see, I immediately went for the first famous lesbian that I could think of and in so doing once again ignored same gender loving people of colour.  Why didn’t I think to show him a picture of someone like Wanda Sykes?

You see, I proved the point that lesbians are indeed not all redheads, but I unconsciously affirmed the Whiteness of the GLBT community by not showing him a lesbian of colour.  It  is very easy to go with the norm when you are trying to prove a point and in so doing forget about how the supposed norm marginalizes different people.

Though my child is bi-racial the world views him as a Black boy and he in fact identifies as Brown for the time being.  I have made a very conscious effort to teach him that all sexualities are acceptable but by not including a face that looked like his, I made it that much harder for him to see a GLBT identity as something that he may himself identify as.  He needs to see himself reflected to understand this is not only legitimate but acceptable.

The lesson I learned in this is, not only must we make a very conscious effort to talk to our children about the biases that they encounter, we must ensure that while making corrections that we do not again marginalize another being.  Tonight when he comes home, I intend to show him pictures of same gender loving couples of various races.  In this way, I hope to normalize what it is to be GLBT to him, so that the next time someone fills his head with nonsense, he will see it for what it is. Not all lesbians are red heads but not all lesbians are White either.