Anne Coulter Gets Shut Down in Canada 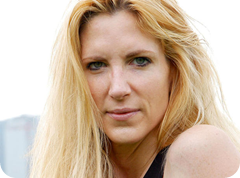 First, let me say that whoever let this hater into our country needs to get a lifetime ban on Timmys.  There is a difference between hate speech and free speech.  In Canada we take this distinction very seriously.  Unfortunately for Coulter, she forgot that her first amendment rights end at the forty-ninth parallel.

But the regular Fox News commentator drew outrage from some, including a 17-year-old Muslim student who asked her a question about her views on Muslims.

Coulter has said all terrorists are Muslims and has suggested all Muslims be barred from airlines and use flying carpets.

When the student said she didn't have a flying carpet, Coulter told her to "take a camel."

In an interview on CTV News Channel Tuesday, Coulter called that remark a joke. "They wouldn't be bringing me in here for a speech if I never told a joke, if I never used satire," she said.

"There's a political point behind my saying that they could take flying carpets, the silliness of all this."

Even before she spoke in London — the first of three speeches this week on Canadian soil — Coulter received a pre-emptive and private caution about the limits of free speech in Canada from the provost of the University of Ottawa, where she appears Tuesday.

She may have gotten away with her hate speech at Western University, but it seems the students of the University of Ottawa would not tolerate her hate speech as legitimate discourse. After loud protests, Ms. Coulters speech was cancelled because of fears for her safety.  In typical conservative fashion Coulter shot back:

I'm guessing the scores to get into the University of Ottawa are not very challenging. At the good schools -- the Ivy league schools in America and their equivalent -- there is no hassle whatsoever. A lot of the students disagree with me but they have too much intellectual pride to stamp their feet and say 'You're ugly'. They come and they ask questions.

How dare she comment on the quality of education in Canada.  Has the woman looked at the difference between the high school graduation rates and the literacy rates between the U.S. and Canada?  Give me a break.  You will notice that in Canada we don’t have a Bob Jones, Regent, Brigham Young , or Liberty University pretending to educate people.  Ottawa university has one of the best teachers colleges in North America.

Anne Coulter ran her mouth off and we don’t have to accept what she has to say, or to provide a forum for her hate.  What she said was absolutely hate speech and no marginalized person should have to be “othered,” so that tools like her can roam around the world with undeserved privilege.   Her statements can only be understood as humour to her because they buoy White privilege.

It is hardly surprising to me that Coulter attempted to speak at these conservative schools, because I am sure the larger universities like York, or the University of British Columbia, would not have touched her with a ten foot pole. Though I must say the resistance at the University of Ottawa, was truly heart-warming.

The bottom line is, when you enter another country, you need to respect their laws and their rules.  If Coulter did not like the Canadian distinction between free speech and hate speech, she was quite welcome to traipse her sorry behind right back where she came from.  The idea that what she wanted was engagement is ridiculous, otherwise her comments would have been based in reasonable facts and not simple human debasement. Monologue does not equal dialogue Coulter.

As of this time, she is still expected to speak in Alberta.  Big surprise; the province that was the first place to welcome George Bush after he left the White House.  Even if her speech in Calgary goes uninterrupted by protest, I do hope that if the language is in the same vein, that Canadian authorities will intervene. Celebrity status or no, Coulter should not be allowed to break our laws for a buck. Enough kowtowing to Americans.  Canadian law and Canadian values mean something.