Nothing like health care reform to bring out the nasty in people. 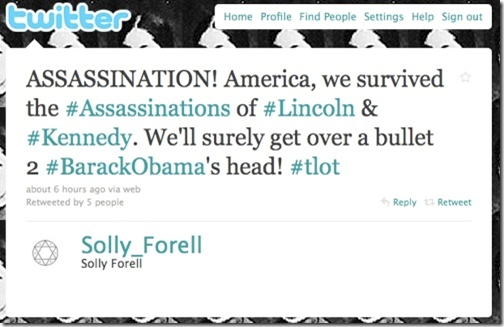 It seems that Forell believed that hir point was not clear enough and then tweeted the following: 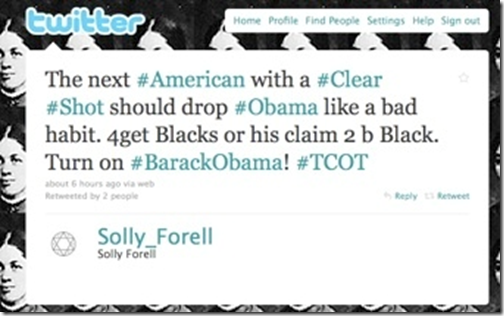 The comments have since been deleted; however, to my knowledge, the account remains active.  When he received a backlash for his commentary, he posted the following tweet. 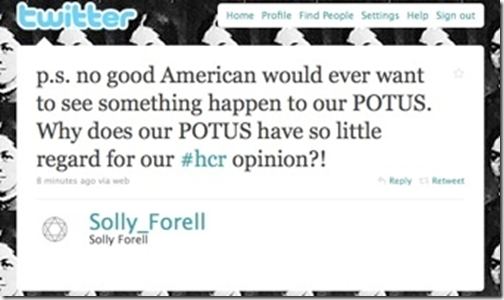 This back step is hardly reassuring because the fact remains, that even before Obama was officially elected to the White House, he had to receive secret service protection early because of the numerous death threats aimed at him.  While there are those that are clearly against the goals of his administration, what is clear is that his largest crime is being Black.

Reading these tweets reminds me of a woman who two years ago declared at a Palin rally, that she was worried that Michelle and Mr Obama, didn’t like White people.  Isn’t it interesting that Whiteness continues to speak about a fear that Blacks will reject them, when the opposite is in fact true? Whiteness continues to oppress Blacks for economic gain. Race as a category was not created because of difference but to justify oppression and we have not moved past this understanding because greed continues to be our biggest motivator.

Whiteness enslaved our people for 310 years, instituted Jim Crow laws, lynched and beat us and killed many of our leaders, yet it continues to speak as though it has the right to its rage.  The tea party is the result of angry White men who fear the loss of undeserved privilege, that they view as a birth right. It is in this frame of reference, that they throw the slur of nigger and call for the death of Obama.

The world is not post racial, and the tea party and racist conservatives prove this on a daily basis.  It is full of ignorant White men, who are not intelligent enough to realize that their enemy is not Blacks or even progressives, it is the rich White men of privilege who have thrown up race as a straw man, to protect the fact that they live in luxury on the backs of the poor.

Poor Whites have a history of making decisions and participating in political action that are not in their best interest because they continually buy into the lie of Whiteness as a real benefit.  It is not Blacks that are stealing your jobs, under educating your children, or reducing your ability to achieve class mobility.  All of the major blocks to progress actually have a lily White face and when they need your angst, they will inflame your anger, but that same rage will never buy you a seat at the table or a membership to their exclusive clubs, because the key is not just Whiteness, but Whiteness plus class privilege.

They scream about hand outs and socialism as though something is being taken from them.  The face of need is always understood to be of colour, though among their ranks stand people who cannot afford their mortgages or to put their children through college.  They speak about working hard, as though they would even be in the position to live in the standard to which they have become accustomed, without the 310 years of free labour provided by Black slaves or the years of indentured servitude that followed with Jim Crow. Let us also not forget that even today, in this so-called era of post racial wonder, that Blacks continue to be underpaid for their labour. The White men of today may never have enslaved anyone, but they are quick to claim the benefits, as if this is an achievement to be proud of.

No matter how poor or undereducated  African Americans have been, they have largely been able to see what is and is not in their best interest, because they are not saddled with the lie that White privilege somehow elevates them. Embracing and loving your Whiteness will not comfort you in times of need, or feed you in times of hunger; it will only give you the ability to look down upon others while speaking to none of your direct issues.

These tea party participants and racist conservatives are nothing but a tool of the White bourgeoisie. They are a mindless mob congregating not to stop a wrong, but to perpetuate their own suffering.  We cannot take their rage for granted, because history has shown that when Whiteness feels challenged, it reacts like a caged animal and attacks.  Obama’s life was in danger the moment he decided to run for president, the question is how long people like Forell will continue to espouse the rhetoric of hate and violence to hold onto a privilege that was never rightfully theirs to begin with.  The next White man in office will not bring you justice, only dismantling the system of privilege will.