Dear Prudence: Perhaps YOU Belong in the Closet 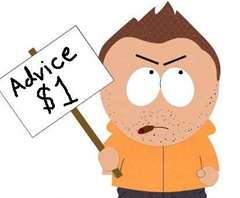 Emily Yoffe is Slate’s advice columnist.  Her “Dear Prudence” column can be read at the Washington Post and Slate.  Advice columns are something I generally speaking stay away from; however, when one is full of this much fail, it is hard to walk away.

Fairfax: Last Halloween, I came to my office in full "office girl" drag. Dress, heels, makeup, wig.... It went over pretty well (although it was NOT a dressup day for the rest of the office). People still mention it.

Well, I did that because I do crossdress occasionally. When people kid me about it, I REALLY want to say "well, it was nice to show the office what my days off are like" or something like that. I'd really love to be "out" it's lonely in the closet, but I know the cat doesn't go back in the bag.

Should I keep my mouth shut, or share with my co-workers?

Emily Yoffe: I bet they still mention it. And I'm not sure it went over as well as you think, just that the rest of the uncostumed office didn't know what to say except, "Nice skirt." When you talk about the closet -- and I assume you don't mean your clothes closet -- if you're saying you're hiding the fact you're gay, then, yes, you should feel free to let people know you're homosexual. However that doesn't mean that anyone, whatever their sexual orientation, should then subject the office to a tour of their sexual proclivities. You don't want the cubicle mate who is into S&M showing up in bondage gear -- it's just not something that belongs in the office. So keep your off-hours wardrobe to yourself.

Where to begin with this fail?  First, she assumes that the author in question is gay, which really highlights her lack of understanding.  Gender and sexuality are two separate entities.  The need to attach the two speaks to her desire to privilege not only a heterosexist but cissexest mode of thought.  Even in her faux attempt to be pro gay, she instructs Fairfax not to flaunt his sexuality and compares same gender attraction to S&M. It’s a logical leap right-if you’re gay, you have sexual proclivities that are way to naughty for polite company.

FairFax could be trans or simply like cross dressing, but the fact that it is constructed as an “off hours” thing, further creates a needless element of shame.  FairFax is expressing a desire to be who he is publicly and rather than supporting him, Yoffe is far more interested in promoting bigotry.  Yep, others won’t like it, so stay in the damn closet.

The truth of the matter is, that if FairFax comes out, it could have negative consequences because there are not enough protections under the law regarding gender and gender presentation.  He will most definitely face bigotry and it is up to him to decide what he wants to do; however, regardless of what decision he makes, shame should not be an element.

When I thought that it could not get any worse, Yoeffe decided to go for the trifectar:

Fairfax, Again: I'm not gay gay is (comparatively) easy in today's workplace. I'm talking about crossdressing. It's something I do, sometimes.

And yes, I do wonder what the rest of the office REALLY thought. But I'll never know.

Emily Yoffe: To all the readers who are chiding me that most transvestites are not gay -- yes, I understand the cross-dresser may well be heterosexual, I was just dealing with the ambiguity of his using "come out of the closet." This letter makes the nice point that cross-dressing is something some people "do." It doesn't matter what your office mates might think about what you do in private -- the point is to keep it private.

Yep, back to the  “come out of the closet”  fixation, how hard is it for this woman to comprehend that many people whom society others lead a closeted life, and this includes trans people and cross dressers.  The term is not gay specific.  Also, “transvestite”? What year are you writing this in?  Come the hell on.

Believe it or not, it does matter what FairFax’s office mates think, not because we should care what others think about our identities, but because intolerance is reflective of our desire to privilege the male/female binary.  Each person that buys into this nonsense is determined to protect their undeserved privilege.

So what if FairFax wants to wear a skirt, or heels and hose?  As long as it does not impede his work, which it most definitely would not if he has an office job, what the hell is the difference? It is only a disturbance to those that are small minded.  Again, I repeat, it is not dirty, nor is it shameful; it is simply a part of who is.

Yoffe could have gone with a more affirmative message.  What saddens me, is that someone who is questioning whether or not there is something wrong with them might read this and infer that they are some kind of deviant.  There are enough negative messages in society without adding to it.  Attitudes will never change as long as people are told to hide who they are for fear of offending others.  Perhaps, those that are offended just need to learn to deal with it instead.