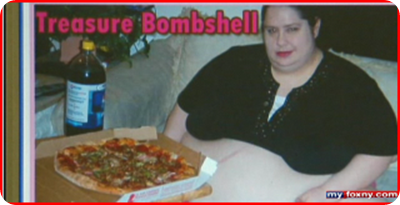 From Twitter to “The View,” the story of Donna Simpson’s attempt to become the fattest woman in the world has made its rounds. The Daily Mail reports that Simpson is 42 years old and is a resident of New Jersey. The story is filled with voyeuristic facts, highlighting such things as her ability to eat “70 pieces of sushi” or “her love [of] cakes and sweet things.”

According to the Mail, Donna’s goal is to become the world’s heaviest woman – taking her 7xl frame to a staggering 1000 lbs. Simpson hopes to achieve her goal weight in two years, even though this will require consuming 12,000 calories a day. Interestingly enough, this is the same caloric intake that the eight time gold medalist Michael Phelps consumes when he is in training.

To support herself, Simpson runs a website on which her viewers pay to see her consume food and pose in suggestive photos. In a video posted at Fox News, Simpson says, “I also have videos of me in motion because they like to see me in motion and see how my fat jiggles and moves.”

When she was asked how it made her feel that people wanted to see her move around like that, Simpson responded, “Love it, love it. Cause they are not saying it in a bad way. They’re paying to see me; they adore it just as they would a woman of normal size.” Her husband is reportedly encouraging her to gain weight and, according to Simpson, is a real belly man.

Simpson’s husband may be the only one who publicly supports her right now.  Dan Savage blogged that she should have her child taken away and similar comments have appeared on Twitter.

Many used her decisions to argue the price of healthcare is inflated due to the presence of obese people, and one commenter at the Cleveland Leader had this to say, “It’s because of irresponsible people like this woman that healthcare costs too much and the President is asking me to pay for her care. Incredible!”  Another chimed in, “That woman needs to DIE. Tomorrow would be nice! She should be ashamed of herself!!!!!!!!!!!!!!!!!! What a waste of LIFE!”

Many go on to blame mental illness, because few can accept the idea of a woman being happy weighing over 500 pounds, much less the 1000 pounds that she is aiming for. The feeder/feedee element as well as the fetishiszing of fat people, which are the most obvious aspects of this story, have not been commented upon that much, however.

The feeder/feedee relationship is not only toxic, it is abusive. Though in most cases, it involves force feeding or the threat of ending a relationship to encourage someone to eat, the mere fact that Simpson made sure to point out that her husband actively wants her to get bigger, points to a troubling aspect in their relationship.

There is definitely a very negative power dynamic at play. Even within her own home, Simpson is fetishsized. This is substantiated by Simpson’s claim that her husband is a belly man. Feeders will typically fixate on large fatty breasts, buttocks, hips or stomachs. Often these men will insert their penises into the folds of fat to achieve sexual gratification.