Get Your Black Irish On Happy Paddy’s Day

Because I love the little Black leprechaun and the comments  that this post gave rise to last year, I have decided to repost it.

Did you think that you would come to a womanist blog and find a Black leprechaun wising you happy St. Patrick's Day?  It seems kind of weird doesn’t it? What could the Irish and blacks have in common?  Have you people never heard of the Black Irish?

The Black Irish are a group of people who have features like dark brown or black hair and dark brown eyes.  Some believe that the Black Irish are descendants of a people from the Iberian peninsula who migrated to both Ireland and Britain over 2500 years ago. Recent genetic research has supported this claim.

Today Whiteness includes groups that were not always uniformly understood as Caucasian.  Some to this day still refer to the Irish as the Blacks of Europe.  In North America, the gradations in Whiteness meant that for quite sometime the Irish were treated little better than Blacks. Signs advertising a job often came with the tag line that no Irish need apply.

As the Irish looked around and realized that they did not have the same benefits as so-called White society, they began to inter-marry and form associations with African-Americans.  I have always found it fascinating that when choices are reduced that people that normally would have a tendency to favour certain behaviour patterns seem to have no problem adjusting to ensure that their physiological and biological needs are met.  The existence of the Métis stand as an example of Whiteness ignoring its privilege, in order to fulfill its biological imperatives.

Whiteness of course cannot allow the dilution of its power in any manner.  As the Irish and African-Americans began to intermarry and form associations, a slow social shift began to happen.  The category of what was considered White slowly 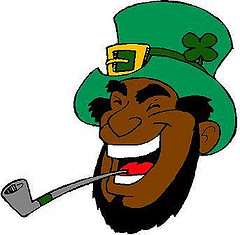 began to grow.   Suddenly the carrot of Whiteness was offered to our Irish brothers in the struggle as an attempt to disable the growing solidarity.

The Irish had the choice that African- Americans were never offered: the ability to claim a white identity and be considered part of the dominant group, or remain as second class citizens marginalized by social construction.  You can guess what happened right?  They followed the rainbow to the end and picked up the White label instead of a pot of gold.  The luck of the Irish would ultimately mean that they would learn to overvalue Whiteness and allow its worship to separate them from their revolutionary behaviour.

When famine descendants like Hannity proudly announce the ways in which their ancestors overcame oppression, there is always a failure to recognize that social inclusivity was only possible because of an overvaluation of Whiteness.  No matter what skills an immigrant of color has, they will always be viewed as less than by dominant White culture in a desire to maintain our hierarchy of bodies and this translates into less opportunities, and sometimes open hatred and aggression.  Today there is much vitriol thrown at the [email protected] community who seek to emigrate to the US for the an opportunity at a financially more stable life. Though resisters speak about protecting American jobs, encoded in their resistance is a desire to maintain Whiteness as the populations dominant race both in numbers and in power.

The Irish were useful because they can/could be constructed as white, and therefore maintain the artificial construction of Whiteness as somehow  inherently better than the brown/black bodies that it seeks to capitalize on.  When you get your green on today, think about how things might have been different had the Black Irish really been Black.