In The Shadow of Hattie McDaniel Stands Monique

Last night Monique became only the fifth Black actor win an academy award.  She won for her unforgettable portrayal of Mary Jones, in the movie “Precious”. 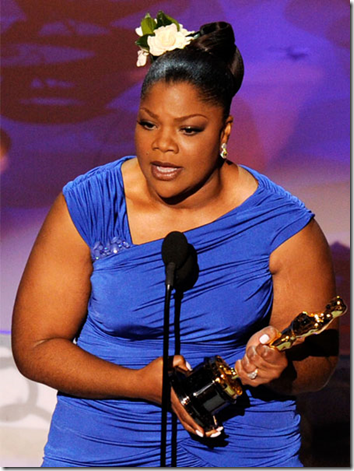 In a tribute to Hattie McDaniel, the very first Black Academy award winner, she wore a beautiful flower in her hair.  In her speech she had this to say:

"I would like to thank Miss Hattie McDaniel, for enduring what she had to so that I would not have to.”

Ms. McDaniel won her award for best supporting actress in the movie “Gone With the Wind” in 1939.  At the Atlanta premiere, not only was she banned from attending, her name was stricken from the souvenir program along with all of the other Black actors.  Segregation meant that no matter her achievements, she was not worthy to be counted alongside the White actors.  She was the first African American to be invited to the Oscars as a guest rather than a servant. What an accomplishment for the daughter of a slave. 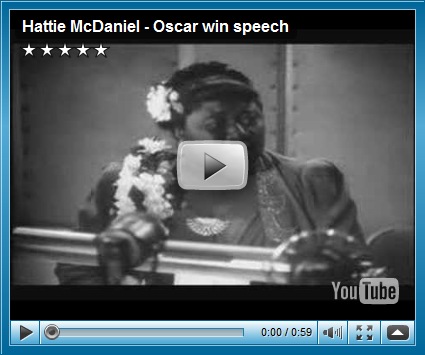 Fay Bainter, Presenter: I present the Academy Award for the best performance of an actress in supporting roles during 1939 to Hattie McDaniel.
[crowd applause as McDaniel walks to the stage and accepts the award]
McDaniel: Academy of Motion Picture Arts and Science, fellow members of the motion picture industry, and honored guests: This is one of the happiest moments of my life. And I want to thank each one of you who had a part in selecting me for one of the awards, for your kindness—it has made me feel very, very humble. And I shall always hold it as a beacon for anything that I may be able to do in the future. I sincerely hope I shall always be a credit to my race and to the motion picture industry. My heart is too full to tell you just how I feel. And may I say thank you, and God bless you.

McDaniel was much criticized  throughout her lifetime for the roles that she played but every ready with a response, she answered her critiques saying, "I'd rather play a maid and make $700 a week than be one for $7." Without Hattie, there would not have been a Monique, or a Halle Berry or a Whoppie Goldberg.

Hollywood has long seen itself as progressive relative to the rest of society; however, it is clear that from the lack of recognition of Black actors and actresses that much work still needs to be done.  There are many roles that are simply not offered to Black actors, even though the script does not call for a specifically White actor. People of colour tend to be cast in roles that typify the social construction of Blackness as negative, thereby supporting White supremacy.

“Precious” is the small independent movie that could, but would Monique have been recognized for playing a character that did not embody every single negative stereotype associated with Blackness?  The character of Mary Jones was an angry, abusive welfare cheat and what is perhaps most damming is that “Precious” is understood to be a Black movie.  Though real Mary’s do exist, they do not typify Black women or the Black experience.  It was simply a story written by a Black woman that needed to be told, chronicling the experience of gender, poverty and abuse. Have we really moved beyond the experiences of Hattie McDaniel if Black women are still understood this way?

Congratulations to Monique and I highly suspect one day someone will thank her for her suffering and her contribution, when they are finally able to accept an award not as a Black woman, but as a great actress in the tradition of all of those who have gone before her.