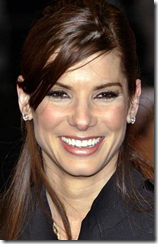 When Sandra Bullock won an Oscar for her role as a White saviour in the movie “The Blind Side,” she spoke movingly about her husband Jesse James and what their relationship means to her. It had to be quite a shock when it was revealed a few days later that James had been unfaithful. From Barbara Walters to Betty White, Americans have rallied around Bullock.

Unsurprisingly, Jesse James’ mistress, Michelle “Bombshell” McGee, has been slut-shamed in public. McGee has been compared to Bullock, and found wanting. Critics have pointed to reports that she gives the Nazi salute, has participated in a photo shoot wearing Nazi regalia, and is reported to have White supremacist decor throughout her home. She also has the letters “W P” tattooed on her body and though she claims that the letters stand for “wet p*ssy,” based on her previous behavior, it’s more likely that the letters stand for “white power.”

Meanwhile, Jesse James’ former wife is now married to an admitted skinhead. Finally, in what is perhaps the most telling detail, the logo for James’ company is eerily similar to the German iron cross. There is now open speculation as whether or not his affair and the logo signify that James is indeed a White supremacist.

Judging from the fact that she has left the home she shared with James, it is safe to assume that Bullock was not aware of her husband’s lecherous behavior, but can the same really be said about his alleged White Supremacist leanings? White supremacists are not known to be quiet about their political leanings. If James is indeed a White supremacist, it is unlikely that he would be able to hide his bigotry for a long period of time. So what does this tell us about Sandra Bullock, America’s Sweetheart?

Bullock won an Oscar for dutifully playing an altruistic White woman, saving Blacks from themselves. Melissa Anderson of the Dallas Observer, describes “The Blind Side” as:

“the movie [that] peddles the most insidious kind of racism, one in which whiteys are virtuous saviours, coming to the rescue of blacks who become superfluous in narratives that are supposed to be about them”.

Perhaps the racism displayed in “The Blind Side” is of a more palatable nature because it extols Whiteness as a virtue, whereas considering the possibility of active White supremacist ideology is untenable, because it implies an overt form of hatred that Americans have convinced themselves is the only signifier of racism. In the so-called post-racial world, accusing someone of being racist is considered a very loaded charge. This is why we often resist questioning situations that are truly problematic.