I have a new post up at the Ms. blog 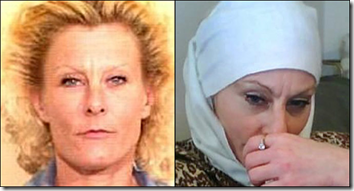 Long before 9/11, Americans had a firm understanding of what terrorists looked like. They’re assumed to be of Middle Eastern descent and, predominantly, men. With these characteristics in mind, racial and gender profiling have been implemented to make the country safer (supposedly): Brown male bodies signify danger.

The federal indictment of Colleen R. LaRose, a.k.a. “Jihad Jane,” has problematized this conception. LaRose is not only a woman, but a white, blonde, blue-eyed suburban American. The Montreal Gazette refers to her as “a Main Street, U.S.A. girl,” and it quotes Michael L. Levy, chief prosecutor of East Pennsylvania, as saying, “The case shatters any lingering thought that we can spot a terrorist based on appearance.”

White womanhood is a complex identity, because even as it is reviled to ensure the perpetuation of patriarchy it is also uplifted to ensure White supremacy. But when LaRose took the name Jihad Jane–thus identifying herself with Islam, a religion many westerners view as violent despite its core teachings and the behaviour of most followers–she disassociated herself from Whiteness. And that made it impossible for commentators to once again apologize for a White American who commits domestic terrorism.

When Joe Stack flew his plane into an Austin IRS building recently, his Whiteness caused him to be understood as simply an angry man who felt trapped by the system rather than a representative of his race. Republican Texas gubernatorial candidate Debra Medina added to this construction by stating that Stack’s actions are reflective of “the hopelessness that many in our society feel.” Though Medina was quick to say, “You cannot excuse that kind of behaviour,” she also called Stack’s final flight “an act of desperation.” Few have been willing to label him the domestic terrorist that he is, despite the fact that he left a lengthy manifesto describing his alienation.

More than gender separates Stack and LaRose. Stack did not frame his actions in language that Westerners associate with Middle Eastern terrorism and, in fact, many may identify with his gripes against the IRS. Stack was Everyman, his Whiteness never in question, whereas LaRose  abdicated the privilege of her Whiteness.