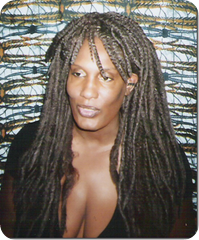 From my earliest childhood memories in Sudan to the ones of being adopted and growing up in the Anacostia Park ghettoes of Washington D.C., I’ve always had an innate curiosity, affection and spiritual appreciation for all human beings of every different type—so imagine my continuing frustrations about being labelled a “racist” whenever I find myself in a discussion with American-born Americans on the issue of race, whether those Americans be black or white.

“It’s because the Americans are dishonest and idealistic about race,” my friends from Nigeria, Israel, Harlem, Norway, Mexico and Argentina insist.  And I’ve come to agree with them.

For instance, if I decide to make love with a white male Producer from NBC NEWS (as I did two years ago); a man I had dated quite regularly, cooked for and shared a mutual love for silent films circa 1912-1922 with—I am “racist” for telling him that on the matter of seeking marriage, my true preference is for very dark skinned black men and that part of my attraction to him is because he is “white” and I would like to experience his “white” flavour.

It doesn’t matter how much I adore him, respect him and have extended friendship to him.  His American colleagues both white and black will insist that I am a racist because I told him the truth rather than uphold the blanket American policy of pretending that there is no physical or cultural difference between any of us.

To tell blatantly honest truth, as I have always done in my published writings and speeches in America, is to risk the reprisal of American insecurity and ignorance, and though I greatly understand that most White Americans are “overly sensitized” when entering discussions on race due to constantly being accused of “racism”—I also find myself weary of the suffering I endure in not being allowed to honestly discuss my reality and my experiences with those Americans that I love and share friendships with as a fellow human being.

Quite a lot, you will hear African-American scholars such as Cornel West and John Edgar Wideman, and African people in general, preaching that there is no such thing as race.  That race is a social construct.  But when I remind them that the “blind spot” of such pronouncements is the fact that black skin, hair texture and facial features are not a social construct—that “color” itself, unlike race, isn’t a social construct—and that the role of “gender” is just as much a social construct as race is, they become perturbed and turn a deaf ear.

I offer this commentary to say to you my fellow Americans—we are making racial issues much worse in this country by pretending that “difference” doesn’t exist and that the past never happened.

When Americans try to pretend that a woman who looks like fully African black and a woman with one drop of African blood and can pass for White are in fact the same woman, sharing the exact same experiences and being treated the same—I say that you are a liar. Mixed are treated better than Black.

When I am chatting at the Post Office with a White woman friend who has given birth to a biracial child, I am tired of being told by the whole California society that it’s abnormal for me, a chocolate-skinned beauty with African hair to prefer that my own children have black skin and beautiful, luxurious nappy hair like mine—because I am their mother and want to see my own image carried on.  This is not racism on my part.  In my mind, the California brigade, and America in general, is extolling a reverse racism.

The idea that Black people should stop existing and be replaced by mixed raced people as some symbol of a “faux mass unity”…as if the erasure of black children will miraculously bring about the end of racism…is plain old fashioned White supremacy to me, wrapped in the cloak of “progressiveness”.

I have love in my heart for every kind of human being on this earth.  But I am also a person wise enough to know that the biggest part of truly loving someone is to tell them the truth about what you think, feel and know—it doesn’t matter if you’re right or wrong; one must tell his or her truth—and this, despite my detractors, has always been my way.

God intended for animals and insects to be colorblind—not humans.  For us, because of our intelligence, she intended that we be able to appreciate; affirm and continuously cultivate the diversity of beauty and extraction that has sprung up from her contradictions.

I am Black, I ordered that my sons are black and I will die Black.  That is not an affront or rejection of anybody else’s reality, but it is a personal and spiritual celebration of my self and the God in me.

Including the Caucasians, I suspect that few of us are as racist as America’s dishonest “everybody’s the same; one face fits all” multi-cultural delusion makes us out to be.