Monique Reveals that her Marriage Is Open…Minutes Later Judgement Ensues 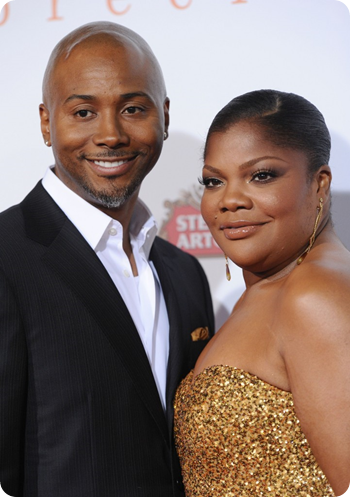 Barbara  Walters read the following statement from Monique on “The View:”

“Let me say this: I have not had sex outside my marriage with Sidney,” Mo tells Babs in this year’s 29th – and final – Barbara Walters Oscar Special, airing Sunday.

“Could Sid have sex outside of his marriage with me? Yes. That’s not a deal-breaker. That’s not something that would make us say, ‘Pack your things and let’s end the marriage,’” she continued. “What if it’s 20 times? So what? We’ve been best friends for over 25 years, and we truly know who we are. Oftentimes,   people get into marriages and they don’t know who they’re laying next to. I’m very comfortable and secure with my husband.”

The quote was taken from an interview that she had done for Ms. Walters 29th Oscar award show.  From the moment that Monique stepped into the spotlight she has broken down walls and this latest revelation is just one of many.

Open marriages are not new and yet they continue to be very stigmatized because we have chosen to believe that monogamy is the only valuable lifestyle choice.  Rather than believing that this negotiation is a private affair, many cast aspersions on open marriages because we see our partners as property. There are many that firmly believe that opening their marriage is what saved them from a divorce.

What we should be honest about is that though monogamy is supposedly the ideal, many stray outside of their marriages anyway.  An open marriage acknowledges the likelihood of changing sexual desires and allows both partner to explore their needs without deception.  It is interesting to note that when someone is unfaithful within their marriage we are quick to judge; however, an open marriage which removes the element of deceit is equally stigmatized.

Reading the commentary on this quote, it was clear to see that shaming was quick to occur.  Some theorized that Monique's husband Sid is gay.  Some felt that it was a sign that Monique's weight ultimately makes her undesirable, causing Sid to need to have other sexual partners.  It is fair to state that Monique invited speculation because she made the nature of her relationship public. Regardless of whether or not this relationship works for her, it is not the norm and socially we have a desire to discipline those who refuse to conform. This is not to say that Monique should have remained silent, but that the reaction to her revelation was highly predictable. 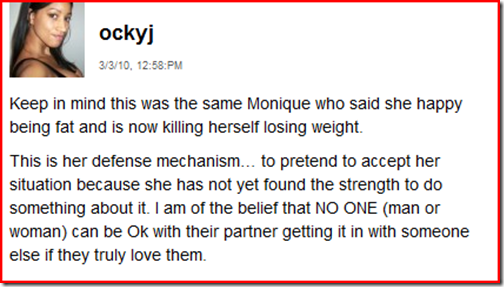 The ladies on “The View” also chimed in to state that their vision of love only involved two people.  What people need to do is remove themselves from the equation.  If monogamy works for you, then have a monogamous relationship but it costs you nothing to admit that this not workable for many.  If we truly believe that sex and marriage is a private affair, then there is no need to spend so much time shaming someone who does not conceive of a relationship as damaged, if the two parties are allowed to explore sexual desires. We may not want the government in our bedrooms, however we are quick to comment about things that are not our business.

Monique says that she is happy in her marriage and that should be enough for everyone. She has not given us any reason to believe that this is a false assertion and again, even if she was being deceitful,  it really is not our business.  Not all social ideals work for everyone and therefore; if the action is agreeable to both parties, we should lay wagging tongues to rest.  Instead of concerning ourselves with someone else’s marriage, perhaps we should focus on our intimate relationships.  The high divorce rate indicates that we have much to do.

Renee
Niagara Falls, Ontario, Canada
I am the mother of two darling little boys that fill my life with hope. They have inspired me to help raise awareness of the issues that plague this little blue planet. If you are looking for a blog that is all about how wonderful and rosy this world is, turn right because this space will not be for you. I am a committed humanist. I believe in the value of people over commodities. I believe in the human right to food, clothing, shelter, and education. I am pacifist, anti-racist, WOC. My truth may not be your truth, but I intend to speak it nonetheless. Please feel free to direct questions or commentary womanistm[email protected]