MS. Failure: A Feminist’s Feminist, The Eulogy of Mary Daley 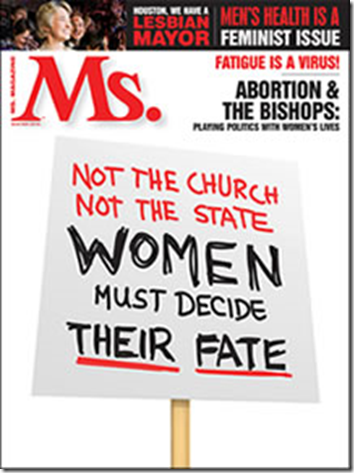 I would love to wholeheartedly embrace MS, because there are so few magazines in existence that are dedicated to discussing women’s issues critically.  Daily, tripe like Cosmo is aimed at us from the newsstands that encourage women to become mindless stepford wives (for good Cosmo take down see evil slutopia).  The world is content to tell women that feminism is passé; however, despite the gains of women’s organizing, we still live in a world of patriarchal privilege and this must be challenged. Ms. is the child of radical feminism and this is apparent in their treatment of many issues.  It is not enough for a magazine to be woman centric, because without intersectionality, the category of ‘woman’ becomes subsumed by White, able-bodied, heterosexual, cis gendered women and this therefore erases many women.

When Mary Daly died, I chose not to write about her because I knew what a powder keg she was.  In many ways she was a brilliant woman; however, her legacy is tainted by the transphobia that she willingly engaged in, proving that marginalization in one area, does not mean privilege in another.   In this months issue of Ms., Mary E. Hunt, wrote a eulogy cataloguing the various ways in which Daly challenged sexism in religion.  It was a classic case of the evil is oft interred with their bones.  I am unsure if Hunt simply did not know of the problematic elements of Daly’s work, or if she simply sought to overlook them in the belief that her genius outweighed the ways in which she discriminated against others.

There was no mention of Lorde’s open later to Daly challenging her on the erasure of women of colour.  Daly never responded publicly to the letter and therefore, one is left to assume that she did not take Lorde’s concerns seriously. It seems the fact that Daly’s work was White woman centric was also not worth mentioning by Hunt and this once again speaks of a desire to present the concerns of White women as primary in  women’s organizing.   I understand the desire to claim our sheroes vigorously because patriarchy has taught us that only men and male achievements are to be celebrated; however, we do a disserve to the category of women if we are not honest about their short comings.

Ms. is working very hard to remain relevant in a world in which much feminist organizing and theorizing occurs either on university campuses or online.   It is however hampered by its dedication to radical feminism, which erases many women.  For Ms. to truly appeal to modern day feminism, it needs to do more than throw up a webpage and attempt to engage  bloggers; it must ensure that each new issue is filled with markers that address  the totality of women’s lived experiences.   Daly may have been a hero for radical feminism, but her approach necessarily “othered” so many, that commentary on her passing without addressing this, tells the reader that the focus of Ms. is still about privilege in the guise of uplift.

White cis gender women of class privilege may burn bras to the end of time and rail about male oppression; however, their experience can never be considered monolithic because it fails to acknowledge that being female in this world often means dealing with multiple sites of oppression. Trans women are dying, they are being raped and murder and you cannot possibly claim to care about the plight of women and ignore this.  Much of Mary’s work justifies the terrible  marginalzation and oppression that they face. She referred to trans women as “Frankensteinian" and living in a "contrived and artifactual condition".  She further served as the thesis advisor to Janice Raymond who penned “The Transsexual Empire: The Making of the She-male”, which  suggested that trans women are agents of patriarchy who are determined to infiltrate women’s only spaces. Certainly, Daly’s belief that trans women are "necrophiliacs who sense the lack of soul/spirit/life-loving principle with themselves and therefore try to invade and kill off all spirit, substituting conglomerates of corpses," provided much of the inspiration for Janice Raymond.

The transphobia in Daly’s work are not obscure references and can in fact be witnessed in much of her writings, therefore; the decision on the part of Hunt and indeed the editors of Ms. to exclude this in their eulogy of Daly, tells the reader that trans women are still not included in the category of woman.  This is no small oversight and therefore, one must conclude that despite claiming to be progressive and speaking for all women, that Ms. editors and writers still believe the limited theorizing that came out of the 70’s era organizing. If we were to accept this as fact, that would mean that feminism has not progressed in forty years.  Feminism will always be imperfect because the women that advocate for it, are themselves imperfect beings; however, glaring oversights like the deification of Mary Daly help to ensure that women’s liberation remains a utopian fantasy bred out of a desire for cisgendered able bodied White women to achieve equality with their male counterparts, rather than ensuring that all women are invited to sit at the table of plenty.