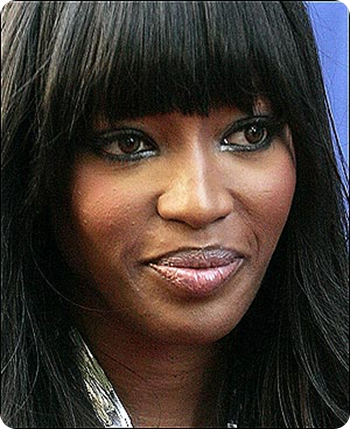 This week Naomi was once again in the news when it was reported that she allegedly smacked her driver upside the head and then disappeared.  She was not charged with assault because the driver declined to press charges.  Yesterday, People Magazine reported that no only did the man decline to press charges, he apologized to Naomi. Of course Naomi gracefully accepted his apology:

"I was accused of unacceptable behaviour towards a driver in New York," the supermodel says in a statement. "I have worked very hard on correcting my previous wrongdoings and I will not be held hostage to my past. I try to treat everyone with respect and I am pleased the driver has apologized," she says. "I would like to put the last few days behind me and move on."

I don’t comment on celebrity news very often because quite frankly, I believe that there are more than enough sources dedicated to following in minute detail the lives of stars.  This story interests me because Ms.Campbell has a history of violent behaviour.

When I write about violence, it is often within the framework of domestic violence; however, I think that this incident is important because it teaches us that violence can come in any form.   Examining this alleged violent incident gets to the route of violence – privilege and a desire to wield power.

In each of the reported instance, the most common element was the class standing of the victim relative to Naomi.  Class is an element that most westerners are very unwilling to discuss critically.  Many live under the false impression that they are middle class, when their debt and pay check indicate that they are actually working poor.

Naomi is a Black woman and therefore negotiates two areas of marginalization; however, as a person of class privilege, the ways in which race and gender effect her on a daily basis are certainly quite different than the average person.   A Black woman without class privilege, who has been identified as violent publicly, would not be able to rehabilitate her image the way that Naomi has repeatedly been able to do.  Despite having a criminal record, Naomi is still able to find work and she is still considered a very successful woman.

This week, comedians like Joy Behar have made jokes about keeping a cell phone out of Naomi’s hands, but I have to wonder how amusing this alleged incident would appear, if Naomi were a poor working/underclass woman?  The degree to which we take violence seriously often has much to do with the social value that we place upon the abuser.

When Sean Penn was known more for his penchant to punch reporters than his acting ability, it was common to joke about his legendary temper, as though his actions didn’t cause real harm.  We justified his temper by denigrating the paparazzi for invading his privacy.

Though Baby Wipes (Terrence Howard) is guilty of beating his wife on MULTIPLE occasions, Ebony still declared him a “Renaissance Man” and wrote a glowing article about what a complex, and giving individual he is.  Do you believe for one moment a poor Black man that had been arrested for beating his wife would be looked upon so favourably?

Wesley Snipes is busy making the rounds right now to promote his new movie.  The questions aimed at him revolve around two issues: the film itself and his recent tax evasion charges.  Even though Snipes is out on parole, he is still able to earn a living.  This is something no poor man would have an easy time doing.  To make this situation more complex, no one has bothered to question him regarding his alleged assault of Halle Berry.  Isn’t it interesting the way that class privilege allows violent acts to seemingly disappear?

In all of these incidents, the perpetrators of violence were also celebrities; however, one of the perks of celebrity is having the class privilege to be able to not only negotiate the court of public opinion but to work the judicial system in ones favour.  O.J. would never have gotten off the first time, had he not had the cash to be able to afford good attorneys.

We are not simply a society of rules, we are a society of separate classes, which necessarily means that those of class privilege will be able to twist the rules to their benefit continually.  The law was not written to protect the poor and the powerless; it was written to support the oppression of one group by another.  Class has a great deal to do with oppression and ones life chances, yet even in the most liberal of spaces, it is taboo to discuss its implications.

When we are silent about the ways in which class marks a body, we are only allowing its effects to remain invisible. Class can be one of the largest marginalizations that a person can face. It can at times be more difficult to negotiate than race, sexuality, gender, and ability.  Class directly influences how  bodies are read and it is not nearly as invisible as most people seem to think.  In each interaction with the outside world, our class status is evident and this is why we go through extraordinary efforts to portray that we are all at the very minimum solidly middle class.

Naomi has not been charged and there is a part of me that wonders how much it cost her to receive this apology, because it certainly appears to be somewhat tainted by the events that were first reported.  Like many celebrities who have class privilege, her past has been wiped clean.  Class gives rich criminals the second chance that no poor criminal or ex felon receives. Perhaps it’s time we stop focusing on the money and start to examine the person behind it.  If we are going to give one group a second chance, or even the benefit of the doubt, perhaps we should do so with everyone.