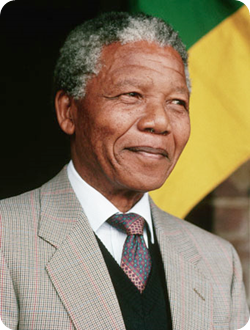 Some time ago I wrote a post regarding Nelson Mandela in which I took much criticism.  The central question I asked was whose hero is he?  It has become impossible to truly question the myth that Nelson Mandela has become; however, because of the ways in which racism is institutionalized, it is imperative that Blacks seek truth rather than accept the oppressors truth.

In a piece written by Nadira Naipaul entitled, “How Nelson Mandela betrayed us says ex-wife Winnie,”  the true legacy of Nelson Mandela is explored.  Hers are not simply the words of a bitter ex wife, they are the words of an angry compatriot continuing to wage battle in a world that has told her that her struggle is complete.

"This name Mandela is an albatross around the necks of my family. You all must realise that Mandela was not the only man who suffered. There were many others, hundreds who languished in prison and died. Many unsung and unknown heroes of the struggle, and there were others in the leadership too, like poor Steve Biko, who died of the beatings, horribly all alone. Mandela did go to prison and he went in there as a burning young revolutionary. But look what came out," she said, looking to the writer. He said nothing but listened.

It is hard to knock a living legend. Only a wife, a lover or a mistress has that privilege. Only they are privy to the intimate inner man, I thought.

"Mandela let us down. He agreed to a bad deal for the blacks. Economically, we are still on the outside. The economy is very much 'white'. It has a few token blacks, but so many who gave their life in the struggle have died unrewarded."

She was pained. Her uncreased brown face had lost the softness.

"I cannot forgive him for going to receive the Nobel [Peace Prize in 1993] with his jailer [FW] de Klerk. Hand in hand they went. Do you think de Klerk released him from the goodness of his heart? He had to. The times dictated it, the world had changed, and our struggle was not a flash in the pan, it was bloody to say the least and we had given rivers of blood. I had kept it alive with every means at my disposal".

We could believe that. The world-famous images flashed before our eyes and I am sure hers. The burning tyres - Winnie endorsed the necklacing of collaborators in a speech in 1985 ("with our boxes of matches and our necklaces we shall liberate this country") - the stoning, the bullets, the terrible deaths of "informers". Her often bloodthirsty rhetoric has marred her reputation.

"Look at this Truth and Reconciliation charade. He should never have agreed to it." Again her anger was focused on Mandela. "What good does the truth do? How does it help anyone to know where and how their loved ones were killed or buried? That Bishop Tutu who turned it all into a religious circus came here," she said pointing to an empty chair in the distance.

"He had the cheek to tell me to appear. I told him a few home truths. I told him that he and his other like-minded cretins were only sitting here because of our struggle and ME. Because of the things I and people like me had done to get freedom."

Winnie did appear before the TRC in 1997, which in its report judged her to have been implicated in murders: "The commission finds Mandela herself was responsible for committing such gross violations of human rights."

When begged by Archbishop Desmond Tutu to admit that "things went horribly wrong" and apologise, Winnie finally said sorry to Stompie's mother and to the family of her former personal doctor whose killing she is alleged to have ordered after he refused to cover up Stompie's murder.

Someone brought in the coffee and we took the offered cups in silence.

"I am not alone. The people of Soweto are still with me. Look what they make him do. The great Mandela. He has no control or say any more. They put that huge statue of him right in the middle of the most affluent "white" area of Johannesburg. Not here where we spilled our blood and where it all started. Mandela is now a corporate foundation. He is wheeled out globally to collect the money and he is content doing that. The ANC have effectively sidelined him but they keep him as a figurehead for the sake of appearance."

As I read the above piece, I once again found myself asking whose hero is he?  Blacks still live in townships largely impoverished while all of the power still lies largely in White hands.    We cannot and should not re-write history to make Whiteness comfortable.  How can we turn the other cheek and forgive when equality and justice has yet to occur?

Across the globe Whiteness is content to tell us how far we have come and yet POC see how far the road ahead still is.  If we were to settle now, we would only bequeath to our  children a world in which the battle is not finished and they are still second class citizens.  Each generation has fought and our ready acceptance of the oppressors truth is a betrayal of their struggle.  We decide our heroes and not the White power structure because only we know the true humiliation of marginalization.

Along the way Whiteness has fought to slow our progress and maintain White supremacy and therefore; the idea that Whiteness would suddenly revere a Black person without an agenda is unrealistic.   Look how Whiteness has embraced Martin Luther King, only to ignore his more revolutionary statements.  Why would we assume that this somehow magically  does not extend to Nelson Mandela because apartheid is no longer in existence?  If Blacks are still undereducated, and living in poverty and Whites still control the economy and live in largely White neighbourhoods, how much has really changed?

As westerners we are told that the struggle has ended and that we should look at South Africa as success and I once again ask a success for who?  Whiteness seeks to pacify and therefore, it is up to us to speak truth to power.  Whiteness, like every other oppressor will never willingly give up power and it would be foolish to allow them to declare victory over racism, when its continuance benefits them.