Check out this article at HuffPo, I’ll wait….

Nothing like White people telling us that a racial slur which is dehumanizing and demeaning, is no longer in existence.  Right, no one says the “N word” anymore because it has been declared un-pc and if you believe that little bit of nonsense, I have swamp land that I would dearly love to interest you in. What better way to start off another round of oppression Olympics than to set Blacks against fat people, like we don’t belong to BOTH categories.  There is no new “N word” because the old one is still used daily across the globe to mark Blacks as “other”.

People used to be afraid to be fat; now they're afraid to say "fat." Oh, we can talk about diets and exercise and the paucity of plus-size fashions--CONSTANTLY--but we can't really use the word "fat" as an adjective anymore. Unless, of course, we're referring to ourselves and are comedic by nature, like Kevin Smith, the director of such inspired movies as "Clerks" and "Mallrats," who recently was removed from an airline flight because his girth made him a security risk.

People are not afraid to use the word fat.  Melissa at Shakesville points out that fat activist use that word all of the time in an attempt to reclaim  a word that has historically been used to inflict pain.  There are also plenty of people who use the word fat as a negative descriptor, because it allows them to create a group of individuals as “other.”  Fat people have learned to be self depreciating because we have been taught that we should always be ashamed of our bodies. 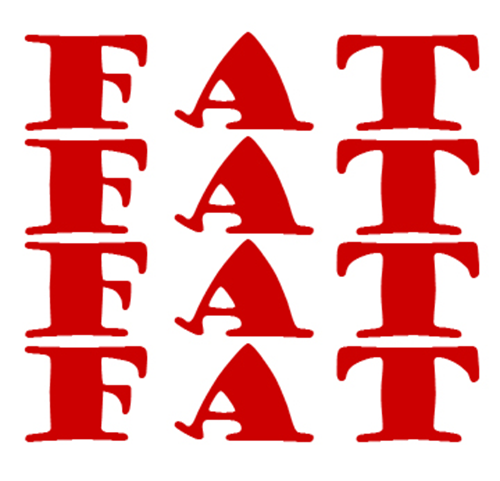 Iovine begins her little polemic by pointing out that DNA is the best indicator of weight and yet she still reaches the false assumption that fat people need to just stop eating so much.

Everything we do to avoid the conclusion that we simply have to eat much less of everything is going to kill us. We can have tantrums and look for pills or gastric bypass or some other miracle to allow us to eat the same and weigh less, but the truth is that the only real solution is to push away from the dinner table about 20 minutes earlier than we want to. It stinks and makes us very cranky, but we can't change it.

Not talking about it is cowardly and patronizing and, ultimately cruel because behind almost every fat child is a fat parent who can't demonstrate the behavior necessary to rescue them from this life sentence. A recent European study said that a child who was fat by age three was overwhelmingly destined to be a fat adult. We can blame TV advertising and processed foods all we want, but a fat toddler is almost always created by a fat parent--and, no, it's not because of their genes or because they're "big boned." Why don't we ever see any "big boned" fatties holding on to their weight in starving populations or on the Bataan Death March? Because there is no such thing!

Did you get the whole fat parent and fat child commentary, um yeah that would be the DNA kicking in and not some sort of signal as to how people parent children.  Suggesting that we should starve ourselves to attain some kind of perceived body type is absolutely ridiculous.

The article is further problematic because it does not deal with the connection between obesity and poverty.   Parents cannot buy their children what they cannot afford to purchase.  If you have a hungry child and limited funds, that box of KD at 1.50 is going to go a lot further than a head of broccoli for the same price.  Instead of fighting childhood obesity, what we should be aiming for is overall child health and this means supporting a healthy diet and activity, not running a competition to see how we can best teach children to be ashamed of their bodies.

The idea that weight is something we don’t talk about is also ridiculous.  Have a five minute conversation with a fat person and they will be more than happy to tell you about the stares when they eat in public, commentary about what is in their grocery carts and well-meaning friends who are happy to tell us how pretty our faces are and how beautiful we would be if we would just lose weight.  Fat people know that they are fat and if for one moment they decide to engage in a delusionary fantasy to the opposite, someone will be right along to fat shame them into the real world. Fat shaming is a huge part of our culture and the refusal to accept this as truth, is born out of a desire to silence us and ignore our experiences.

This entire article seemed determine to engage in as much privilege, and shaming as possible.  Fat people don’t need this kind of “help” and Black people don’t need to be told that our problems are no longer in existence.  Rather than a guide in what to do, Iovine should really consider her work a primer in how to engage in as much privilege as possible in the least possible words.  Say it with me everyone: