Senator Eric Adams: Stop the sag, pull your pants up 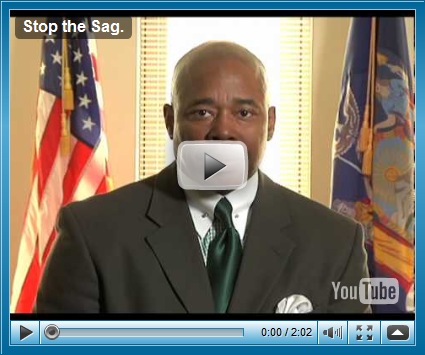 Throughout history, in every society cultures have had to endure negative caricatures and stereotypes imposed on them.  Even in this country, images of ridicule portraying certain groups in a negative way have  been forced on minorities and it has taken activists and united communities to confront and reject these misrepresentations.  It is disturbing that today we still see similarly  negative and degrading imagery, but this time it is self imposed.  We see this insidious spectacle among some of our young people.   Whenever they walk down the street with their pants sagging, this is not a fashion trend; it is un-kept and unnecessary.

Sagging pants have become a degrading and self imposed icon.  They follow in a long tradition of negative stereotyping that results in groups being seen in a negative light, particularly since the origin of this style comes from a prison culture.  Our young people should not promote it.  They should have too much pride and are above this.

Hi, I’m New York state senator Eric Adams.  My message is, let us not be the ones that make our community seem foolish.  If we raise our pants, we raise our image.  Don’t surrender control over your own image.  We have power so very much of our messaging to others.  I ask our communities, our parents, our neighbours, our friends to explain and be a role model over correct dress.  And I say to our youth all over the city and state, you can raise your level of respect if you raise your pants.  The city, the country, the globe is watching us.  We are better than this.

I am constantly on my son about pulling his pants up and if he is wearing anything sagging I make him put on belt.  I know that even as I am doing so, that I am participating in middle class values or what senator Adams calls “correct dress.” The truth of the matter is, that the sagging pants originates in prison culture and therefore, is considered socially a reflection of broken people.

I want my son to think that this goals in life entail far more than going to prison and yet I know that which is counter-culture is often denigrated to force conformity.  When I had my dreadlocks down to the middle of my back, I faced much negative backlash from Blacks because we have so internalized a very specific idea of what a proper appearance is.

Whose standards are we trying to maintain and why?  There is very much a class element to this whether we want to admit it or not.  As a Black person, I know that when someone does something I completely disapprove of, part of my anger is the knowledge of how this will reflect upon me and make it harder for me to get through the day.  I am sure that this is not something unique to Blacks, because only dominant bodies exist in this culture as individuals.

Most inside the community know that this style originates in prison culture, but how many outside see it this way?  No matter how well dressed a young Black man is, he is always considered a predator.  Any adult Black man can tell you a story about some ridiculous White woman grabbing her purse in their presence, or people crossing the street to avoid them.  Quite often, the appearance of a person is irrelevant; their race is enough to signify a negative social standing.

I think we should consider who sets the norm.  The idea something is just proper, ignores the fact that standards are set by dominant bodies, so that society will be able to more easily discern who has outsider group status.  When we see people dressed a certain way, we immediately associate beliefs and in fact patterns of behaviour without knowing the individual in question intimately. Our first impressions are built upon societal norms and the fact that these are often “othering” to marginalized bodies is rarely processesed.

I may not like the look of sagging pants, but I am also honest enough to admit that it is because it signifies many of the negative associations that are socially made regarding Blackness.  I am also aware that given all of the anxiety about how terrible this particular fad is, that it is directly aimed at young urban Black youth and yet White kids also wear their pants this way.  When was the last time you saw a White politician express anxiety about sagging pants?  They don’t need to because a White person race will speak on an individual level allowing them to avoid any form of association, whereas; the same is not true for an Black person.

Honestly, I know that this a fashion I don’t want my child adopting but I will not lose sleep if his pants end up sagging because the person inside those clothes are far more important.  We should be talking about education, healthcare, housing etc., sagging pants are only an important issue if we are socially invested in taking on the attributes of dominant bodies.  We and we alone decide what symbols mean.