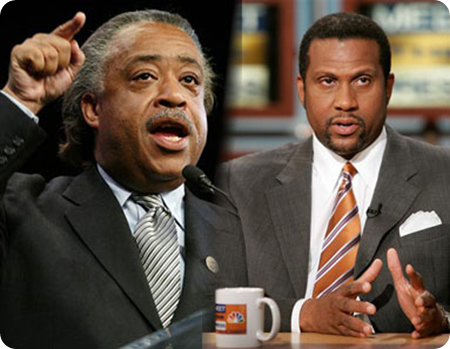 We have a tendency to refer to members of the African Diaspora as a community, despite the fact that it is filled with people that have wildly different perspectives and experiences. Race supposedly unites all Blacks, but the hierarchy within the so-called community means that there will always be some voices that are louder than others. The master’s tools are omnipresent in every social justice movement.

Last week, for example, the Reverend Al Sharpton and Tavis Smiley engaged in a very public disagreement. Smiley attempted to take Sharpton to task for not being open about the meeting he attended with President Obama in conjunction with NAACP Chair Benjamin Jealous, National Urban League chief Marc Morial and a host of other “Black leaders.” Tavis particularly took umbrage with reverend Al’s support of Obama’s race-neutral approach to policy making.

At the heart of his argument, was Sharpton’s statement that President Obama “is wise not to ballyhoo a Black agenda.” Though this attack was publicly aimed at Sharpton, Tavis has a history of criticizing President Obama, and has written a book in which he demanded that Blacks hold Obama accountable to the community.

Obama has never pandered to old Civil Rights leaders and this means that their ability to influence his policies is very limited. When Obama was elected president, it was to represent all Americans and not the specific minority group that he is a part of.

White presidents have always taken actions to support White supremacy, but even their polices strictly benefited a minority that possessed class privilege, rather than White people as a whole.

Obama’s largest policy push has been revamping healthcare and though this has not specifically been targeted as an initiative that is directed at Black people, they certainly stand to benefit from having greater access to doctors and preventive care. Obama is very aware that in order to win in 2012, he must always appear to represent all people, because the votes of Blacks are not enough on their own to secure a victory for him.

Sharpton and Tavis are dependent upon the dissatisfaction of the Black community in order to earn a living. Unlike Sharpton, Tavis does not have strong Civil Rights credentials. Not only did Tavis support Hillary Clinton during the election, he rejected the appearance of Michelle Obama at his Negro Super Bowl (read: State of the Black Union), when Obama was unable to attend due to previous commitments.

According to CNN, Smiley claimed to have received angry e-mails and death threats. He further claimed that his brother and mother were also harassed at the time. The backlash was so virulent, that Smiley resigned from his position at the “Tom Joyner Morning Show.” Since that time, Smiley has been critical of Obama’s administration at every opportunity.

Tavis has always held this so-called meeting of the minds over the head of would-be Black leaders as a way to wield power, while promoting his latest book in the process. The participants seem to find the opportunity to pontificate on a large platform irresistible and therefore participate in the deification of Smiley. Self-promotion is quite possibly Smiley’s greatest skill, despite all of the gibberish about setting a so-called “Black agenda.”