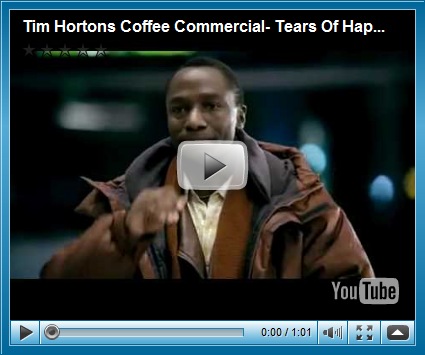 I watched every single day of the Vancouver Olympics, sure in the knowledge that all of the foreign visitors would leave with a Tim Hortons addiction.  I have written previously about the Canadian addiction to their coffee.  There are three Tim Hortons within a twenty minute walking distance from my home.

Though Timmys is pure Canadiana, it is very rare to see a person of colour in any of their commercials.  When the above commercial first aired, it was very tempting to get sucked in by the message of unity and multiculturalism.  Who wouldn’t want to smile at a man being united with his wife and child in their new homeland?  When he hands her the cup of steaming coffee, Canadians are meant to feel as though this really makes them one of us now. This commercial first aired during the Olympics and thus fell in line with a Canadian desire to present our society as multi-cultural to the world at large.

The problem with this commercial, is that like one they ran a few years ago about a Chinese family,  people of colour are constantly portrayed as coming from somewhere else.  This belies the fact that people of colour have been a part of this country before it was even a country. Blacks and Chinese are not necessarily new immigrants and to continually construct us in this manner, still maintains the image of Canada as necessarily White and all of our achievements as a nation as based in White efforts.  This completely eliminates the contributions of people of colour, who in many cases lost their lives for our advancement.

Much to the consternation of many, the majority of today's immigrants are of colour; however, this does not mean that there are not White immigrants.   If people of colour are not understood to be Canadian and are always conceived of as being from somewhere else, this means that the multi cultural society that we claim to celebrate is a fraud.  People of colour rarely appear in the regular Timmys commercials though we certainly work for the corporation and support them with our hard earned dollars.  If POC are only visible when we are playing the role of the other, this implies that we are little more than a tool to maintain the national myth.  How and when we are represented matters.

In Timmy’s new roll up the rim to win advertisement, no people of  colour appear and yet this is one of the biggest promotions that they will run for the year.   When they are appealing to the masses, Whiteness is the face that they overwhelmingly choose to represent.  We teach multiculturalism to our children and yet the reality is that we do not practice inclusion in our everyday affairs.  Critical race discussion do not happen and people of colour are understood to be looking for special treatment and special rights because true equality is not the goal of multiculturalism, doing just enough to appear better than the U.S. is.

The Olympics proved to be an international stage for the great Canadian lie. From the opening ceremonies right through to the closing, lies were told about our treatment of First Nations citizens and many racialized bodies were simply erased.  People of colour were expected to be quiet and not burst the bubble for the sake of national representation; however, the cost of such silence is our personhood and this was not considered to be a sacrifice because privilege has convinced White bodies that our right to exist is unimportant.  This is oppression and this is wrong. Canada has a history that it needs to own and if it brings pain to White people  to realize the ways in which they continue to benefit from White privilege, so be it.  Each day the nation grows and benefits from the labour of bodies of colour and therefore we have a right to expect equal treatment and representation.  Using bodies of colour as a tool to sell a lie is not equality it is simply a covert method of racism, which we seem to have a gold medal in.