It takes a lot to leave me sputtering and incoherent but Touré accomplished that with his recent tweets. Touré is a journalist and talking head for BET, MSNBC 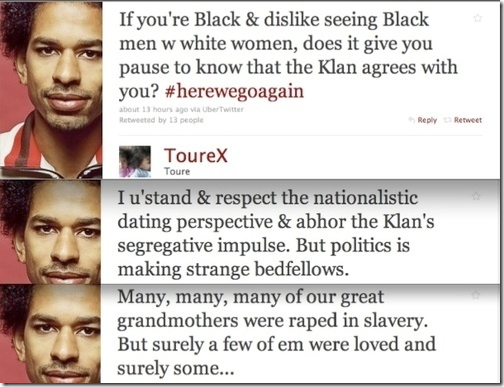 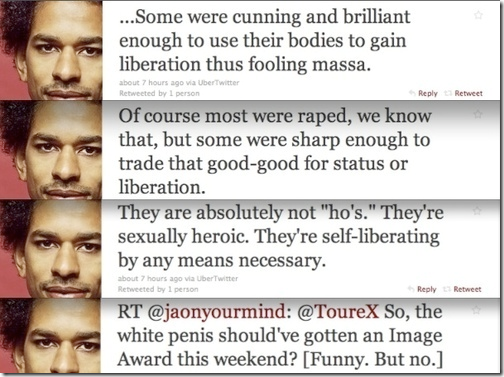 Sexually heroic?  They were raped repeatedly..any intercourse between slave and master is RAPE because the power differential would eradicate the possibility of consent.  If you don’t understand this basic fact, it is because on some level you believe that men have a right access women’s bodies.

Black men have repeatedly spoken about the ways in which racism effects their life's chances, without acknowledging that this does not remove gender privilege. And to even suggest that love could exist in an environment in which the woman was considered chattel is ridiculous.  If you love someone, you don’t hold them in bondage and force them to satisfy your  every need.  All this argument does is justify the crimes of White slave holders but leave it to a Black man to find the good in slavery, when it involves the oppression of Black women.

Touré claims that his twitter account was hijacked, but I don’t believe him for one minute.  Let’s just face the fact that he is not the first man to display his inner fool for the world to see – John Mayer anyone?  Black men are no different than White men; if the opportunity arrives for them to oppress a woman you can be sure that they will because their  entire existence has been in support of patriarchy.  They are betrayal sprung from our very wombs and yet it is on our bosom that they expect comfort and salvation

This story is once again not getting any circulation and I highly suspect it is because the people being devalued are Black Women, the unwoman of the world.  When we rage against the world ,we are angry and uncouth and yet the violence and emotional venom aimed at us goes unnoticed, except by those of us who carry the pain of being the worlds punching bag.

Touré has scrubbed his twitter account and though the words have been erased, the pain has not.  You see, once you send something out into the world you cannot take it back and you cannot erase the hurt that you cause.  There has been no formal apology and neither MSNBC or BET has had anything to say about his commentary.  MSNBC already has a history of forgiveness (see Imus and nappy headed hoe commentary), so I suppose the silence is really unsurprising.

Once again, I am going to ask for your support in denouncing behaviour that is clearly damaging.

(they are going to transfer you to viewer services HELL, but get creative with it.)

I think that what bothers me the most is the knowledge that this kind of thing is going to keep happening, because though Black men are our partners in the struggle against racism, the pursuit of power has caused them to ignore the harm that they do in the name of patriarchal privilege.  It is perhaps the most bitter pill to swallow.

H/T What About Our Daughters