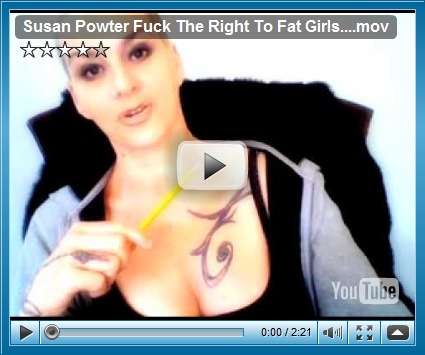 Fuck The Right To Fat Girls….. Scrolls across the screen

Yeah, precariously perched.  Are you kidding me?  Are you kidding me? Fat is not connected to disease.  Wrong absolutely wrong, 85% of all disease can be directly attributed  to lifestyle.   85% of all disease.  So that is so wrong don’t ask.  The message being sent by the N double A, F AAAA, is so completely wrong, completely irresponsible and completely disconnected from the truth that every fat person knows.  Because I at 260 pounds; there was nothing good about being 260 pounds, there was nothing healthy about being 260 pounds, there was nothing that looked good, there was nothing that felt good.  And let me tell you something Gabby, because Gabby is the only one that matters here, your weight is going to effect everything in your life.  From every breathe you take, because a human body carrying that much fat is under the burden.  Your heart is under a burden.  That’s real, I don’t care what the N double A C A A fat A says, cause they’re wrong.  Absolutely wrong, couldn’t be further from the truth. You’re weight child is going to effect every moment of your day; certainly your career.  You are in a industry where your gonna be judged microscopically.  And you say woman – Hollywood and you say African-American woman – Hollywood. You say morbidly obese, morbidly obese; that is not in question, that is what is happening here.  So first stop denying what is everyone, Howard is telling the truth.  Judged by her weight, totally and absolutely, you ain’t gonna change that, but can we at least stop denying that it’s real.  So Gabby dear, here is the thing, you are way too young, way too young to be this diseased DISEASED, not comfortable, not connected with your body.  You can be fat and anything you would like to be.  Your chances are less in many industries, in much of the world because we live in a world that judges that.  So whether the NAA I don’t even know what they are, the right to I am large in charge.  Kirstie stole my line.  I’m large and in charge. No you’re not.

To be Cont….. scrolls across screen.

Once again with the fat shaming.  Has anyone ever heard Gabby say that she is unhappy with her life, or that she is uncomfortable with her body?  Every interview that I have seen her in, she appears to be full of life and extremely happy.  Of course the fat haters say this is an impossibility, cause everyone knows that teh fatties are miserable.

Susan Powter is also not a disinterested party.  Every word out of her mouth comes laced with the fact that she has books, speaking tours, and videos to sell, based in the idea that fat is the most awful condition in the world.  Instead of trying to “Stop the Insanity,” perhaps Powter should take a big cup of STFU. Clearly Powter is biased. When you make your living in the diet industry, you are hardly going to promote the idea of health and happiness at any weight.

Fat is at times connected to disease in that it is a manifestation of bodily dysfunction.  My inability to be mobile and taking steroids, certainly is the main contributing factor to my weight; however, that does not mean that this is the case for every fat person. Fat quite often is simply a reflection of genetics.  If we didn’t spend so much time shaming people, perhaps more people would be accepting of their bodies.

Finally, Powter is so full of privilege it is disgusting.  Where does she get off calling a 27 year old woman a child? There she is a White woman, of class privilege, calling an adult Black woman a child, but hey she is well meaning right and not full of racial bias.  Not only does Powter consider Gabby diseased, she clearly does not deem her to be an equal because she readily infantilizes her.

Powter may think that she is some sort of benevolent White angel, but her behaviour speaks to the exact opposite.  You don’t get to shame someone, for the sake of selling your products and then infantilize them, but then claim it is out of love.  If that is how she loves someone, can you imagine what she does to those she dislikes?  Bottom line, Powter et al. need to leave Gabby alone.  Their so-called benevolent advice is demeaning and the only truth they speak to, is a desire to shame people.