What if that Pebble Becomes a Boulder?: Racism and Sexism on Campus and in Everyday Life

This is a guest post from Natalie Wilson of professor what if?  Her work regularly appears here on Womanist Musings bi-weekly, in her very popular Monstrous Musings column. 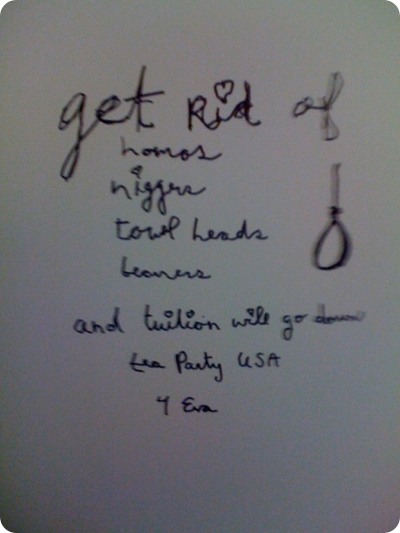 The theme of one of the common complaints I often get from students in my women’s studies classes is “feminism is so depressing.” Students, young and fresh-faced, though eager to dissect and critique the world around them, also seem to yearn to look through the world through rose-coloured glasses. They generally dive into analyzing privilege and oppression historically, happy to give examples of the injustices our world has doled out for centuries. However, when asked to hold up a mirror to their contemporary moment, they often like to focus on the positive changes, suggesting that somehow all the rumours of a “post-racial” and “post-feminist” society are true. It is partially my job to place large cracks in such a rosy-eyed view, revealing that, yes, racism, sexism, homophobia and all those other ugly –isms are still going strong.

On the campus where I teach, this was in shocking evidence today on, of all places, a bathroom wall. The picture above, sent to me by a student, was taken last night in one of the main campus buildings. Placed there on the eve of the statewide day of action defending education budgets, it is surely a modern-day exhortation to “keep your mouth shut,” a threat to those of us on the side of history that seek to progress society towards justice rather than conserve the longstanding privileges that the maker of this sign unabashedly seeks to maintain. (And don’t you just love how there is a heart above the ‘i’ on this message?!?)

While I had planned to post something upbeat today about my daughter turning eleven this week, detailing positive changes in culture compared to when I turned eleven in 1982, my own rosy-eyed view of feminist accomplishments has suffered a brutal beating in the past few days. Locally, just in this past week, there has been news of a high school senior sexually assaulted and murdered, there has been a spate of racist attacks at local college campuses (with the picture above only one of many incidents), there was, just yesterday, another young woman attacked by two men at a local park.

On a more personal level, I was told by my son’s principal that a teacher’s P.E. commentary, consisting of “you throw like a girl” and “don’t use the girly weights” are meant to be “humorous.” “She is a very strong woman,” he assured me, “a role model.” On the one hand, I am proud my thirteen-year-old son sees the sexism his principal fails to, on the other hand, I am deeply disturbed that such sexism is still passed off as “just a joke” and excused by claims that it’s ok because she is a “strong woman.”

To top it off, I have somehow received a plethora of emails of late that either assume I am a man (due to the “Dr.” title I imagine) or that address me as “Mrs. So and So.” This last annoyance is so slight in comparison to all the other horrors of this week, yet it somehow rankles me– it seems, in short, like a virtual but constant reminder, knocking at my in-box, reminding me “keep your mouth shut…you are only a woman…who are you to try and change the world?”  This “little thing” reminds me of Jewelle Gomez’s realization that “Sexism could be like a pebble that needs to be removed from a shoe; a tiny thing that throws off a woman’s gait, causing her to limp, sometimes unconsciously, to avoid pain every day.”

This week, it seems it is not only pebbles, but huge boulders, and I am indeed limping from the resounding evidence that no, we are not living in a post-racial, post-feminist society. However, despite those who wish to “get rid of” people like us, the people who want to change the world for the better, I will keep limping along, teaching my “depressing feminism” and endeavouring to remove pebbles and boulders out of the path of those who march towards justice.