If the GLBT community wants their rights and humanity respected, protected and codified under the law, it is imperative for them to remember and realize that they must do the same thing for others inside and outside the GLBT community.

Thanks to TransGriot reader Leigh for directing my attention to this developing story of racism and biphobia rearing its pointed head in of all things, a GL run softball tournament.

On Tuesday the National Center for Lesbian Rights in conjunction with the law firm of K&L Gates LLP filed a lawsuit on behalf of players Steven Apilado, LaRon Charles, and Jon Russ in U.S. District Court for the western district of Washington.

The story starts at the 2008 Gay World Series softball tournament that was played in Seattle and sanctioned by the North American Gay Amateur Athletic Association (NAGAAA).

NAGAAA’s stated mission is promoting “amateur sports competition, particularly softball, for all persons regardless of age, sexual orientation or preference, with special emphasis on the participation of members of the gay, lesbian, bisexual and transgender community.”

A mission they miserably failed to execute on for five members of the San Francisco based D2 softball team. 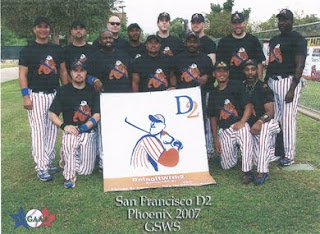 D2 and its members have played in San Francisco area gay softball leagues for several years. During this GWS tournament they got hot, won games and kicked butt all the way to the GWS championship game of their division.

D2 discovered during the title game that a (probably a losing) team filed a protest claiming they were in violation of the NAGAAA 'two heteros only' rule. In the interim teams kept interrupting the championship game to the point that D2 lost.

When the game was over five D2 players, Apilado, Charles, Russ and two white teammates were immediately summoned to a conference room for a protest hearing.

After each player was interrogated, a panel voted on whether he was “gay” or “non-gay.” NAGAAA’s committee refused to entertain the possibility that the players could be bisexual. In response to a player’s statement that he was attracted to both men and women, a NAGAAA member responded, “This is the Gay World Series, not the Bisexual World Series.”

Ultimately, the predominantly-white committee voted that all the men of color, Charles, Russ, and Apilado, were not gay. The committee voted multiple times on at least one player. The committee also declared that the other two players, both white—one of whom had given precisely the same answers as Russ—were gay.

The NAGAAA committee recommended disciplinary measures against Apilado, Charles, and Russ, their team, and the San Francisco Gay Softball League, including retroactively stripping D2 by forfeit of their second-place World Series finish.

The men are seeking $75,000 each for emotional distress. They're also seeking to invalidate the alliance's findings on the men's sexual orientations and to reinstate D2's second-place finish in the 2008 GWS.

“This case shows that bisexual people are an integral part of the lesbian, gay, bisexual, and transgender community. The San Francisco team was truly diverse and welcomed bisexual, gay, and straight players, and they saw each other as not just teammates, but family,” said NCLR Sports Project Director Helen Carroll.

“We all deserve to be treated with respect no matter what part of the ‘LGBT’ we are. It damages our community to conduct witch hunts and to exclude people from playing in a sports league for not being ‘gay enough’. We wouldn’t accept this kind of treatment from a non-LGBT sports organization and we shouldn’t do it to ourselves.”

Beth Allen, a Portland, OR based attorney who specializes in LGBT-related legal issues and represents the sports association in the suit, said that NAGAAA “agrees that if they were a public accommodation, they could not limit players on the basis of sexual orientation. But they’re a private organization, seeking to provide a forum for gay and lesbian athletes, or those who would like to become athletes, to play ball together in an environment where they don’t face any type of discrimination. ... It is not an unusual situation to have a softball league that is organized by principle on a protected class.”

Allen was quoted in Advocate.com as saying that she found the suit brought by NCLR to be “very disheartening.”

“Certainly I’ve seen infighting in the community. Anyone who’s worked for our rights has seen infighting, because we’re all human,” Allen said. “But as I’ve told [NCLR executive director] Kate Kendell, it baffles me why they’ve taken on this case. Why is the National Center for Lesbian Rights asserting this claim on behalf of three poor beleaguered straight men? I don’t get it.” 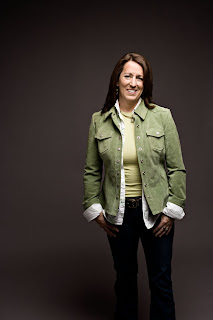 Kendell said the suit “makes very clear that the core issue in the case is that sexual orientation discrimination is harmful, demeaning, and stigmatizing. What these players were subjected to in terms of inquiry about their private sexual lives was a violation, not only of the softball association’s own rules but also Washington state law.”

NAGAAA, which organizes the Gay Softball World Series, has refused to change the discriminatory rule that excludes players based on sexual orientation, to apologize to Apilado, Charles, and Russ for the traumatic and humiliating public interrogation they endured, or to disavow the practice of interrogating players about their sexual orientations in protest hearings.

NCLR Staff Attorney Melanie Rowen said, “Washington law prohibits discrimination based on sexual orientation in public accommodations. But conducting an inquisition into someone’s sexual orientation to exclude them from playing sports in their community is not just discriminatory—it is outrageous.”

NAGAAA has not yet responded to the complaint in court, and this has the making of an interesting court case that I would love to see.

But it goes back simply to the Golden Rule- Do unto others as you would have them do unto you.

They also need to cognizant of the fact that relations with African-American GLBT people are still testy after the flurry of anti-Black racism that popped up in the GLBT community post Prop 8. That being said, discrimination in the GLBT community should not be condoned or tolerated at any time.

Here's hoping that NCLR is successful in driving that point home to the NAGAAA.