Ann Coulter Dates Jimmie Walker Can I Get A Negro Please 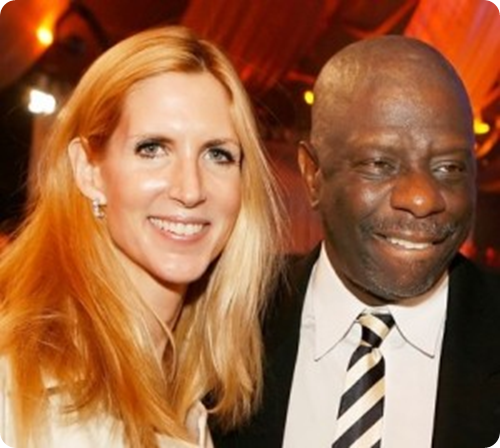 So there I was having an after dinner beer and kicking it, when Monica of TransGriot sent me the following image.  After throwing up in my mouth a little, I read the following:

“Ann is Ann,” the “Good Times” star told EUR’s Lee Bailey. “She’s a great woman, I have nothing but good things to say about her.”
Using words like “adorable” and “sweet” to describe the right wing talk show host, known for using racist rhetoric in discussing her conservative views, Walker brushes off her polarizing antics as part of her pundit persona.
“She does the Ann stuff,” Walker concedes. “But she’s just a beautiful person. I adore her. …She’s a very, very nice person and I’m lucky to know her.
“I have nothing but the highest respect for her, and I’m thoroughly impressed with everything she does – whether she’s writing Sarah Palin stuff or doing whatever,” he continued. “I’m thoroughly impressed with her.”
So does that mean Walker shares her political views?
“No, you know, Ann does what she does when she works for Fox, obviously. But she’s not just Fox,” he says. “She’s other things, too. She’s extremely bright, she’s beautiful and I’m honored to have anything to do with her.”

Ann Coulter, a beautiful person…NEGRO PLEASE -- come the hell on.  I tell you, some Black men will do anything to get with a White woman.  Love does not conquer all.  For a Black man to be with Ann Coulter he would have to have no sense of self.  No piece of ass should be deemed more important than your self worth. Clearly, all Walker saw was the long blonde hair and legs and any sense he may have had went out the window.
Lest anyone need a reminder, here are a few choice Coulter quotes:

It turns out New Jersey State Troopers, by scientific evidence that was -- the Bush administration kept rejecting and rejecting -- were stopping, if anything, not enough blacks.

That’s right Jimmi, better not drive while Black in Jersey, ‘cause your honey thinks you might just need a little more interaction with the po po.
On Halle Berry’s Oscar win Coulter had this to say:

And yet still, somehow, white guilt worked on Hollywood liberals! Berry had successfully mau-maued her way to a best actress award and then acted surprised. It's interesting that Berry makes such a big deal about being black. She was raised by her white mother who was beaten and abandoned by her black father. Clearly, Berry has calculated that it is more advantageous for her acting career to identify with the man who abandoned her rather than the woman who raised her.

Those were the words of the “sweet, beautiful person”. Isn’t it adorable the way that she callously pronounced that Berry chose her identity because she thought that it would help her get ahead.  I guess being Black explains why so many women have won best actress awards.  I also love the way that she brings up Berry’s father as a reason to reject Blackness. She is suggesting that women should avoid Black men because they are all violent. Are you paying attention Jimmi?
Even if I were to give Coulter the benefit of the doubt and believe that this is all some act that she puts on to earn a living, her actions have real world effects.  Her public face is that of a hate monger, thus each day she reduces people of colour for a buck.  I don’t understand how Walker can publicly embrace a woman who is content to tear POC apart for money and in fact, the only answer that I can come up with is that he has internalized  so much hatred, that he has come to overvalue Whiteness.  While I am sure that playing Missy Ann and the Mandingo appears to be an elevation to Walker, to the rest of us it renders him a house slave….Keep shuckin’ and jiving cause nothing you are doing is dyn-a-mite.
Posted by Renee at Monday, April 19, 2010