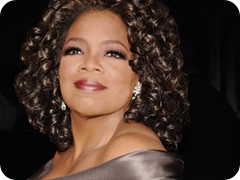 There can be no question that through much hard work and good timing Oprah Winfrey has become a woman of great power.   A simple mention from her is enough to push a book onto the New York Bestsellers List, or to put your business on the map.  Celebrities go on to promote their new projects and often issues of social importance are discussed on the show.

Unfortunately there are those who use Oprah’s success to suggest that racism is something of the past.   Oprah it seems is the embodiment of the so-called post racial world.  The following is an excerpt from “The Huffington Post” entitled, “Oprah, Kitty and Me:”

I believe that racism is far from extinguished in the world -- despite the celebration that greeted the election of Barack Obama to the presidency. Racism lurks in our country and all over the world. But people who have transcended prejudice have a special obligation not to carry grudges. After all, grudges hurt the grudge-holder most. We also have a responsibility to set a good example by not holding grudgers.

What in the world is a “professional Negro” and how exactly does Oprah avoid this category?   Since this woman declares that she is not actually Black what right does she have to judge how Oprah performs Blackness socially?  What real understanding can she possibly have of what it is to be Black and female in this world? If the word the author is looking for is sell-out then she is not in position to make that determination because not only is she WHITE, Blackness is not a monolithic identity.

It is interesting that the author can admit that we are not post racial, and yet still profess that there are people for whom class and power mitigates the degree to which they are subject to prejudice, to the point where it is nonexistent. Oprah’s body is marked just like any other Black woman on the planet by both racism and sexism.  The degree to which Oprah has class privilege definitely mitigates the amount of marginalization that she may currently face, but that does not mean that it has disappeared.   For a woman in Oprahs position, it is likely that what she faces is very nuanced rather than extremely overt.

One example that she most recently faced was the backlash of White women after she refused to have Sarah Palin on her show during the election.  The whole we made you and we can break you was bandied about as though Oprah were not actually a person, but a possession created specifically to entertain on command.  The backlash was very public and was quite telling regarding how Oprah’s body is understood by the masses.

Regardless of the economic privileges that Oprah has accumulated the idea that she “should not hold grudges” is ridiculous.  Here we have a White woman lecturing a Black woman on what response she deems is appropriate.  Would she have considered telling Hillary Clinton not to be upset by any sexism that she has faced? This smacks of women of colour are just too damn sensitive.  Enough, however Oprah chooses to respond to ways in which she is ‘othered’ is her business and no White woman has the right to decide what is and is not appropriate because White women have no idea what it is to face racism.

While White people continue to lecture Blacks on our freedom and advancement, they are not above attacking Oprah because Whiteness grants them the power to do so.  This article was racist to the very core and sought to seek fame off of the back of a woman of colour just as many White women have historically received advancement by standing on our backs.  So, yeah racism still exists and White women participate in it everyday while holding tightly to their leftist, equal opportunity cards. As long as one is a person of colour race is never a non-existent entity in your life, and only an over privileged White person could fail to understand this most basic fact.