The comic strip “Archie” is continually evolving and so it comes as no surprise that they have decided to add a gay character. 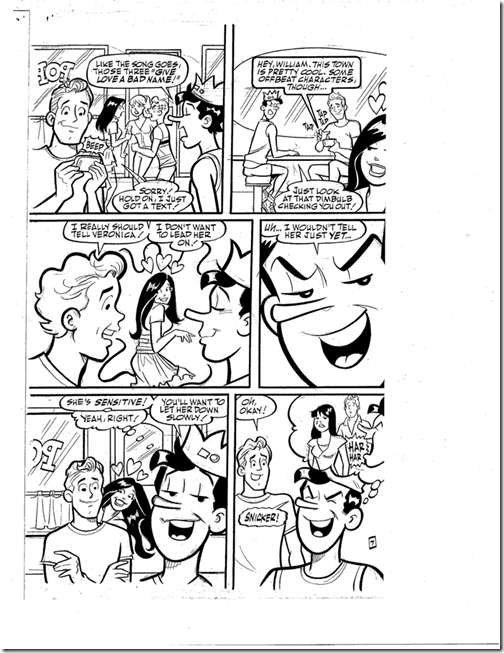 The new characters name is Kevin Keller and he makes his appearance in Veronica #202, which will be released, September 1st, 2010. His introduction story is titled “Isn’t it Bromantic”.

Kevin tells Jughead that he is gay right from the very start but when Jughead notices that Veronica is just head over heels for Kevin, he tells him to keep it a secret.  It seems that watching Veronica go through her usual antics is just far too funny.

I gotta say, I am extremely ecstatic about this.  The more often we see gay characters in mainstream venues, the easier it becomes for people to begin to understand that being a member of the GLBT community is not damaging, or deviant.

I also think that this is a great thing for GLBT youth.  They are constantly surrounded by heterosexual culture and therefore, finding good representation of themselves can be difficult. Puberty can be a very trying time and for GLBT kids, it can be even more complicated, because the world teaches them that how they feel is wrong and somehow dirty.  Even though Kevin is just a cartoon character, he is a teenager who is unafraid to say that he is gay and this in turn will encourage kids to believe that despite what heterosexist culture teaches, that there is nothing wrong with them.

This is a win for all concerned and I am so glad that Kevin is going to be included in the comic stream.  We are a diverse culture and simply because certain groups have historically had power is no excuse to silence and erase the various others who enrich our shared human experience.

In a movie that I watched some years ago (whose title I have since forgotten), part of the plot was a day without the gay.  For several weeks gay people went on strike to support same gender marriage and the city was in chaos.  Gay people don’t just live in gay areas or work in gay business, they are an integral part of our society and it until we recognize this very basic fact, we will continue to marginalize them.  For all you know your, doctor, lawyer, mailperson, baker, waiter/waitress, grocery clerk, or sanitation person is gay.  Each one of these people performs valuable services, you simply don’t know if they are gay or not.

Since the chances are that you are already interacting with, or dependent upon someone who is a member of the GLBT community, showing them in various roles in mainstream culture should be a no brainer.  Somehow I think that it will only be a matter of time until we hear from the “family values” folks about how harmful this is, because they are more interested in protecting heterosexual privilege, than righting a historical wrong.  The GLBT community has always been a part of every society on earth, and so I believe it is time that our work, art, and laws start to reflect that. Only in a world that is determined to marginalise could a gay character in a comic strip be lauded as progressive.