Boys can be Single Ladies As Well

I know that there are some of you who think I have an obsession with the song “All the Single Ladies” however I simply had to post this video. 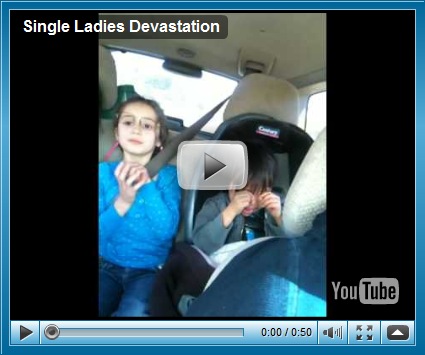 Description: Two girls and a boy start to sing “All the Single Ladies.”  The father in the front seat instructs his son that he is not a single lady and the child immediately begins to cry.  Realizing that he hurt his sons feelings he says, “I’m sorry, you’re a single lady”.  The child refuses to be quieted even after the father sings a line from the song.

Moments like this are exactly how we inform our children about gender and what it means to be a boy or a girl.  Often as with this young boy, it means discouraging them from doing things that they are naturally inclined to  because we have privileged gender performance over individuality.

When children are discouraged from following their interests they get robbed of their potential.  Though Mayhem  is only four, he has a very decided interest in fashion.  He will often comment on what I am wearing and let me know if he thinks that my skirt does not look good with my shirt.  Though little boys are supposed to be too busy playing with Tonka trucks to notice this, it has become a daily occurrence in my household. None of his interests make him any less male – they make him Mayhem.

Right now the little boy in the video had the courage to show his displeasure at the gender discipline that he received from his father, but as the pressure mounts to perform masculinity, that same scream of injustice may be swallowed.  Gender policing happens on a daily basis and none of us escapes, no matter how much we attempt to ignore the signs.  It seems to me, that if we really loved children and valued their potential, that we would allow them to become who they are, rather than directing their choices based in gender.