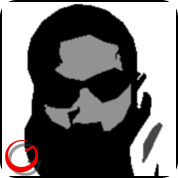 I am a writer, a philosopher, a dreamer, and an idealist.  I have no credentials worth mentioning, and I don't presume to know anything about anything.  I am merely a man, and a person of color, and I am always contemplating what that means for me and my relationship to the rest of the world.  That relationship is negotiated by an overwhelming sense of justice, something I mitigate with a harsh rationality lest I come completely undone by my emotions.  I blog about social issues, culture, politics, philosophy, and entertainment at Godheval.net. 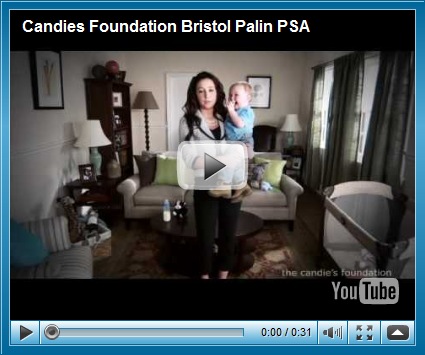 Bristol Palin, well-dressed in expensive clothing, and in full-make-up, stands in a well-furnished room - carpeted, with paintings on the walls, a variety of lamps, and sun pouring in from large windows.  She is holding a baby, about a year and a half old.  After every line she speaks, the camera zooms in suddenly, and her appearance changes slightly - her make up spoiled, her hair a bit more unkempt.  By the end of the video, she is wearing only a pair of plain jeans a t-shirt, her hair in a non-descript style, no-make-up, and dark circles under her eyes.  The camera has zoomed back out to show that there is now hardly any furniture in the room - only a couch and a crib.  The walls are no longer painted or papered, there is no art, no lamps, and the curtains are poorly hung in only one window.  The baby, now on the floor, instead of in her arms, is now wearing only a t-shirt and diaper instead of full clothing and shoes.

"What if I didn't come from a famous family?"

"What if I didn't have all their support?"

"What if I couldn't finish my education?"

"What if I didn't have all these opportunities?"

"Believe me, it wouldn't be pretty."

"Pause before you play."

I posted this video without any lead-in, because I want the viewer to process it on their own, before I weigh in with my thoughts. However, I imagine that the mere title of this post prefaces the video and will make you see it in a different way. Just as the mere fact that it is Bristol Palin in the video – because of who her mother is – prefaced how I watched the video. Or how automatically any analysis of teen pregnancy in my brain necessarily intersects with my understanding of privilege.

Perspective is a funny thing.

Upon first watching the video, I felt all sorts of ill feelings. On the one hand, we have a woman talking about the importance of making good choices with regards to sex – to think before you act, more or less. There is no inherent fault in that argument, because thinking is always good.

On the other hand, the video is using class war to advocate celibacy. And class war automatically intersects with the discussion about race and privilege.  For example, when Bristol Palin’s pregnancy first became national news, there were many commentators who mentioned how there was a general demand for sensitivity towards Bristol’s pregnancy, but that the same demands would not have been made if she had been one of Obama’s daughters or any other teen mother of color.

When the mother is white, teen pregnancy becomes merely a regrettable mistake, one that must be handled with great sensitivity and care. But when the mother is a young woman of color, it becomes some sort of moral failure on her part, not only a bad decision but a symptom of the epidemic of poor decision-making by people of color in general.

Mind you, I am not saying that the video above is making any statement at all about race – at least not explicitly. But it does scream privilege loudly, if only the privilege of being wealthy over being poor. In that way it is waging class war, wherein being wealthy affords one a buffer  against the difficulties of raising a child in poverty, and suggesting that therefore only poor women need to think carefully before they risk pregnancy.

This is not incidental. It is no secret that Sarah Palin – and by extension Bristol Palin – occupy that strange gray area where they are pro-celibacy but also pro-family, which more or less translates into “Wait until you’re married, then have a bunch of babies.” They are also part of the same social conservative platform which has put forth the mythical icon of the welfare mother, the poor woman who allegedly has a lot of babies so that she might receive extra financial benefits from the government.

That being the case, the pro-family position is not one that these ideologues hold with regards to the poor. And should a poor mother become pregnant on several occasions, because she – like the Palins – is pro-family, then she should not expect any sort of support, most certainly should never consider abortion, and therefore be left with the only “reasonable” choice – to send a host of new children into the foster system.

Better yet, maybe she should just abstain from sex altogether.  It is a confusing message, for sure.

What is the poor mother to do? Deny herself the right to have a family because she’s poor? It is blatantly obvious that this piece of propaganda – I don’t even think it deserves to be called a “Public Service Announcement” – is drawing a qualitative distinction between the poor family and the wealthy family. In the beginning we see Bristol, with all of her posh clothing and furniture. By the end, we see Bristol portrayed in the way that the wealthy view the poor – as having absolutely nothing, by virtue of their lack of material wealth.  It is impossible that a poor family could be just as happy as the wealthy and privileged Bristol Palin in their choice to have a child.

At the same time that this platform calls for sensitivity towards Bristol Palin and her pregnancy, it approaches the poor with moral judgment and paternalistic mandates for what decisions these women should make regarding their bodies and their families. It is not merely hypocritical, but is nothing less than class war. And when we consider that racism and classism are inexorable – indeed the “welfare mom” is portrayed as a black woman, and people of color are disproportionately poor – we come to realize just how much propaganda can be stuffed into a mere 30 seconds.