I came across this video at Dharma Pancakes and because it so clearly comes from the heart, though I am not well versed on all of the politics involved, I felt compelled to share it with you. 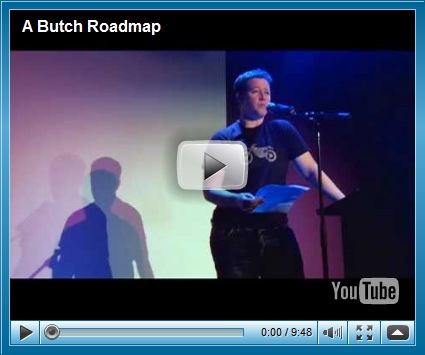 I’m gonna read this story, it’s called a Butch Roadmap.  A couple of months back I came upon  an article in an online version of  Extra, it’s Canada’s kinda queer magazine, entitled, “Winnipegs pride wants parade to be family friendly.”  In the article the then chair of last years pride parade was was quoted as saying, “We have to remember that this is a public event.  Part of the parade is to show people we’re not extremists.  When pressed to explain just what she meant by extremists, she responded, “drag queens and butch women.”  She then added, that it was “important to show the people of Winnipeg that there are mainstream queer community members to, like lawyer and doctors.”

Now I’m Canadian, so this meant that I was so mad that I seriously considered writing a stern letter.  The subtext of her words stung my eyes and burned my throat.  Apparently, according to this fucking genius, regardless of my politics or attitude or tactics, I was an extremist by virtue only of my appearance.  Nothing of who I was, or what I might contribute to my community mattered, because of what I looked like and in order to be acceptable to the good citizens of Winnipeg we needed to put forward a more mainstream face to the general public liberally laced with professionals.  I wondered how this line of reasoning was going to over with the many perverted, transexual, leather dyke lawyers from working class backgrounds I am lucky enough to know. And apparently this woman had not read that part of queer history where drag queens and butches started the whole fucking thing by finally standing up and rioting in response to police persecution and brutality, and now she didn’t want us at her parade anymore;  we weren’t family friendly enough.  Then I wondered what exactly this meant for those of us with families.

Then just recently I heard a rumour that the younger queers don’t like the word butch anymore and this makes me wonder if I were twenty years old again, instead of forty what would I call myself?  I grew up without a roadmap to myself.  Nobody taught me how to be a butch.  I didn’t even hear the word until I was about twenty-five years old.  I first became something I had no name for in solitude and only later discovered the word for what I was and realized there were others like me.   So now I am writing myself down, sketching directions so that I can be found, or followed.

If the word for you is butch, remember this word, it will be used against you.  I the word for you is butch then your history is one of strength and survival and largely silent.  Do not hide this word under your tongue, do not whisper it, or sweep it under the basement stairs.  Let it fill up your chest and widen your shoulders, wear it like a sleeve tattoo, like a medal of valour. Learn to recognize other butches for what they really are: you people, your brothers or sisters, you see both are just words that mean family.  Other butches are not your competition, they are your comrades, be there when they need you.  Go fishing together.  Help each other move and move and move and move. Polish your rims, or your chrome, or your boots, or your knobs together.  See these acts for what they are – solidarity.

Do not give your butch friend a hard time about having a ponytail or a Pekinese Pomeranian cross, or nail polish or even a fucking smart car.  Get over yourself, you are a rare species, not a stereotype. Trim your nails  short enough that you could safely insert into your own vagina, should you ever want to.  Scars and purple thumb nails are a status symbol.  When attempting to operate, maintain or repair anything mechanical always remember the words of my grandmother, “the vast majority of machines are still designed, built, driven and fixed by men, therefore; they cannot be that complicated.”

Be exceptionally nice to little old ladies.  They really need their faith in the youth of today restored and they might think that you are the youth of today.  Let them butt in line at the Safeway.  Slow down and walk with them at cross walks so they are not the only ones holding up traffic.  Drive your grandmother to bingo, shovel her driveway. Let chivalry not be dead. Misogyny we can do away with but chivalry… If you are going to be the kind of butch who is often read as a man or a boy, then be the kind of man or boy you wish you would have slept with in high school.

Be a gentleman, let her finish her sentence.  Share the armrest, do her laundry without shrinking anything this time.  Buy her very own cordless drill.  Open doors for gigantic body building men and say things like, “here let me get that for you.” Carry a pocket knife, letter and a handkerchief on a person at all times.  learn flashy lighter tricks, how to tie a half hitch, a slip knot and a double windsor.  Learn how to start a fire with some flint and some dry moss and then forevermore use lighter fluid or gasoline and a blow torch.  Burn most of your eyebrows off lighting the bbq with the birthday candle and then tell everybody all about it.  Wear footwear that makes a clomping sound as opposed to a tick or a swish.  Let the weird hairs on your chain or around your nipples grow unhindered.  Learn how to quilt, crochet, hook rugs, women appreciate a fellow who isn’t afraid of their feminine side.

Practice saying you’re sorry, however you people say it I don’t know.  Practice saying you’re sorry, this is one area where you should not use your father as a fucking roll model.  Fonzie was a fucking asshole and if you are too young to remember who the Fonz was, youtube it.  Locker room talk – no man, a sure fire way not to get laid a second time.  Sleep around, this time without feeling guilty.

What are your thoughts on what Ivan Coyote had to say?