“Dirty Mexicans” on the Internet

Many people use the internet to expose the inner bigot that they are reluctant to visibly show to others, and some simply use it as yet another avenue of oppression. Former MLB player and current Sportsradio 1310 The Ticket producer and talk show host Mike Bacsik, took to twitter after the Mavericks lost to the San Antonio Spurs to relay his frustration. 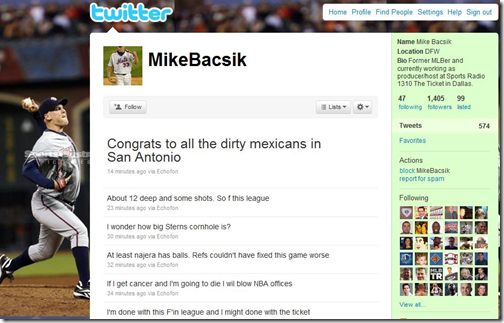 The comments have since been removed from his twitter feed, and Bacsik has apologized for his language.  He has also been suspended:

"Mike Bacsik's comments were unacceptable and offensive, and are inconsistent with the core values of KTCK and Cumulus.  We have made the decision to suspend Mr. Bacsik with the hope that he will take this time to consider the insensitive and hurtful nature of his comments," said Dan Bennett, Cumulus Radio vice president and market manager. [source]

Last week I wrote a post in which I revealed a few of the hateful comments that are in the Womanist Musings spam queue.  Most bloggers will occasionally do something similar; however, it is only a minute synopsis of the amount of bigotry that regularly happens on the internet.

Many mainstream sites are not safe, because commenters regularly engage in racism, homophobia, ableism, sexism, or fat hatred.  Watching people actively oppress is never something that one has to seek out, because it is an everyday phenomenon  of online discussions. Unlike off line, where oppression is often very nuanced and covert, on the internet it usually amounts to some form of overt attack.

With all of the examples of oppression, there are still so many people who come to sites like Womanist Musings and expect to be taught.  When an incident happens, a marginalized body must always justify their anger and even then, if a person is dedicated to maintaining their privilege, they ignore the answer.  Marginalized bodies find themselves having the same conversations with people they interact with, each time having to prove how bad it really is --despite the fact that the evidence is everywhere you look.

Some will take comfort because Bacsik was disciplined for his racist vitriol; however, it is clear that despite the fact that consequences are occasionally meted out, that people still seek personal gain by oppressing others.  The benefits may not seem readily tangible, but no privileged body wants to face the same oppression that a marginalized body does.  No straight person wants to know what it is like to be bashed for their sexuality, and no White person really wants to be devalued on sight for the colour of their skin.  Believing that one is better than oppressed bodies justifies the hierarchal imbalance that we live with.  People oppress not because they see the  inferiority of another, but because they fear being on the receiving end of the treatment that they readily give out.

This fear frequently manifests as rage in the face of any kind of resistance, because the ability to oppress is viewed as a birth right.  Whether it  is the able bodied, men, heterosexuals, or those who exist with class privilege, people believe the lies they have been socialized to believe, even when it directly hurts them -- so much so, that decolonizing ones mind becomes an epic if not insurmountable task.

Marginalized bodies have nothing to prove because the evidence of their oppression is everywhere you turn.  When you demand request that we teach you our pain, you are rejecting what is right before your eyes and again, demanding that we perform to your satisfaction.  It is not simple cluelessness, it is wilful ignorance and that is a symbol of privilege. Despite the apologies and the petty fines, the hate and the bile continue to multiple and therefore, I can find no comfort in empty gestures.

So I suppose for some, this will amount to an inability to make marginalized bodies content, but how can we accept band aid solutions when the hatred is so visceral?   Mike Bacsik’s racist display will quickly leave the front pages, only to be remembered by the people he verbally assaulted –and yes, hate speech is an assault.  Today, someone far less famous will say or do something racist, sexist, homophobic,  classist, ableist and fat phobic, and it will be left to the marginalized body to deal with the fall out.  The cost of this hatred is that we live stressful lives, and often die much earlier, but what is the loss of happiness and human life when we have imagined rights to uphold?