Dr. Phil Takes on the Fatties 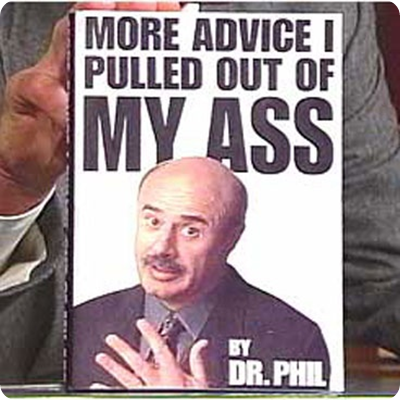 I stopped watching Dr. Phil almost immediately after his program first aired because of his often patronizing and sexist approach to women’s issues, fatphobia and his heterosexist, cissexist approach to the GLBT community.  Unfortunately my boycott did not mean that his show got cancelled, in fact; he continues to maintain very good ratings and people still buy his books, even though he is the only psychologist that I have heard of that is an expert on everything.

Well, yesterday he once again decided to take on the issue of fat by discussing “The perception of the obese, and how accommodating society should be towards the overweight and if its possible to be fat and healthy”.  If you think that the premise would clearly indicate a hot mess, you are absolutely right.  In an effort to appear neutral, he had fat activists, as well as people representing an anti fat position.  In what world is this a balanced debate?  When you have people questioning your right to exist, and questioning your right to take up space, it is a forum of bigotry in which fat bodies become vile objects.

We’re not fat haters we don’t have hate for fat people. We hate fat behaviour. We hate laziness – Michael karolychyk while wearing a t-shirt that says no chubbies

Isn’t that nice, he doesn’t hate fat people.  I wonder if he wants a cookie for his amazing show of tolerance?  Of course to do this, we have to ignore his conflation of fat with laziness.

For someone to be discriminated against, there has to be something innate like race or sexual orientation when you are talking about judgement. Habitual and improper eating is what is causing almost all obesity, and that does not need protection –Meme Roth

So I suppose the fat shaming of Gabourey Sidibe, Kelly Osbourne, Jessica Simpson, Kevin Smith, Monique and Queen Latifah is all just a figment of our collective imaginations.  I suppose people don’t really stare and giggle when fat people eat at a restaurant.  OOOh and my personal favourite, I suppose all gyms are friendly when fat people enter to try and improve their level of physical fitness.  It is certainly a problem when people feel as though they have to diet and lose weight before they can even comfortably enter a gym.

A chubbie is someone who is lazy, makes excuses and doesn’t want to accept accountability. We have thrown cupcakes at our clients. If you can’t handle my program that means you can’t handle the truth. If we have a client who is routinely cheating on their diet and they are lying about it we give them a urinalysis. – Michael karolychyk

Right, it’s not about accepting yourself for who you are but wallowing in food and denial because it is just sooooo much fun being fat.  Why even consider the fact that sometimes fat is a manifestation of an illness and not and illness in and of itself.  I suppose his approach would be news to my resperologist and my rheumatologist, but hey, everyone is competent to give medical advice these days aren’t they.

Are you freaking kidding me?  No one is shaming fat people for daring to take up space.  I suppose all of the diet ads which tout that women should lose weight so that they can wear a bathing suit (never mind that bathing suits come in multiple sizes) aren’t aimed at fat people.  What about the fact that the first lady is so focused on childhood obesity that she publicly announced putting her daughter on a diet, never mind what it did to the child's self-esteem, and the fact that despite the whole everything in moderation mantra, chocolate Easter eggs were banned at the White House Easter egg hunt this year.  Between “The Biggest Loser” (which btw is UNHEALTHY) and Jamie Oliver’s tears, I cannot go a day watching television without someone telling me how gross my body is and what I should be doing about it.

But just in case the message did not get through to you, Dr. Phil offered us a woman who is trying to change her fatty ways in the body of comedian Erica Watson.  He generously arranged for her to work with Jillian Michaels of “The Biggest Loser” and when Peggy Howell from the National Association to Advance Fat Acceptance  tried to interject on the grounds of safety, he quickly shut her down.  You see, this was not about having an objective conversation, this was his attempt to tell fat people that we are the problem and not society’s incessant shaming and failure to provide accommodations.

Even the so-called middle position played by Kelly Osbourne was filled with problematic elements:

I took more hell for being fat than I did for being a drug addict. You know that you can help it if you really want to, but it so hard to change and to find the motivation.

So in the end, despite having fat people in his family and not being a thin man himself, Dr. Phil unsurprisingly decided to parrot the dominate discourse of fat equals unhealthy and disgusting despite supposedly presenting both sides of the issue.  In true Dr. Phil tradition he closed with:

Body size is an indicator of your health, there is a risk factor associated with obesity.  There clearly is a choice here, when you chose the behaviour you chose the consequences.

In this he is absolutely correct, as I will never get the hour back of my life that I wasted listening to people spout bigotry and ignorance as though they knew better than I what is good and healthy for me. I made the choice to listen to his bigotry and my consequence is the anger I now feel.