Feminism for the rest of us 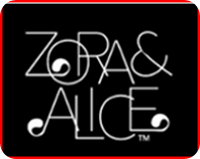 This is a guest post by Ope Bukola who is the founder/Editor of a new online magazine for young black women called Zora&Alice.  “From work to health to relationships to politics, when you’re with your sisters, it all gets talked about. It’s a conversation that doesn’t force you to get in a box and stay there. You’ll sound confident and fragile, hopeful and cynical, silly and serious. Your mood will shift. You’ll contradict yourself. Others may see a girl at odds with herself. We see a girl figuring out herself.”

Last weekend, I attended a panel discussion at the Brooklyn museum moderated by Jennifer Baumgardner and Amy Richards, authors of Manifesta: Young Women, Feminism, and the Future

. The panel, featuring Kates Shulman, Farai Chideya, and Marisa Meltzer, was billed as a discussion of feminism’s future and called “Redstockings, Riot Grrls, and Right Now: Three Generation of Feminism in Conversation.”

Don’t know Riot Grrl? Redstockings? Well, neither did I. Feminist history wasn’t covered in my high school curriculum and I didn’t take women’s studies classes in college.  What I took away from the panel was that, while its values are still relevant, the feminist “movement” needs to go a long way to be accessible to American women today.

In spite of how much women have gained since the 1960s, feminism as a movement remains divisive. Admittedly, a lot of mainstream ideas about the movement are rooted in misinformation.  Bra-burning demonstrations, which most scholars agree never happened, have yet to leave the popular imagination. The basic ideals of the movement – equal rights and legal protection for women – tend to get lost amidst all the backlash against “radical, man-hating” feminists.”

Not all criticism of feminism can be choked up to negative media portrayals however. If the panel conversation was any indication, some of the (dis)credit can be blamed on the movement’s relationship with its past. The conversation too often veered into the esoteric: how Ms. magazine or Sassy changed lives, distinguishing characteristics between second, third, and fourth wave feminism, etc.  In the panelists’ defense, both Farai Chideya and Marisa Meltzer offered practical solutions for listening to and engaging young people who don’t necessarily speak the language of feminism. And Jennifer Baumgardner pointed out that many young women are “living feminist lives whether or not they’re using the language to describe it.”

Still, to keep up with American young women, the movement needs to move beyond certain revered institutions (e.g., Ms.Magazine) or sainted causes (e.g., Reproductive Rights).  I support and appreciate the role that both have played in our progress. But I also think the “feminist movement” needs to broaden its messages to stay relevant to an increasingly diverse population.

The Ones Being Left Behind

If they had to describe a typical feminist, I think most people would say obnoxious, elitist, and probably white.  Historically, women of color have struggled to find a place within feminism. (Womanism evolved partly in response to the perceived lack of black women’s voices in feminism).  Third wave feminism, supposedly more socio-economically and culturally diverse, is not the dominant image of the movement.   This is problematic for a movement that wants to thrive in an increasingly diverse country.

Likewise, socially conservative women represent another potential missed opportunity. Religious/Spiritual affiliation among American youth remains robust and the feminist movement needs a better sell to social conservatives.  Can you wear a hijab and be feminist? Be pro-life and feminist? I’d say the answer is yes in both cases but feminists aren’t at the forefront of showing how the movement’s values (e.g., dignity, equality, right to privacy, etc.) can operate in a religious and/or conservative context.  We are quick to defend those who tweet their abortions but mum on how to make an argument for the sanctity of life that still respects a woman’s right to choose.

In spite of its bad rap, feminism is more relevant than ever.   My introduction to feminism came a few years ago when my then 16 year old sister asked for a copy of Ariel Levy’s book Female Chauvinist Pigs: Women and the Rise of Raunch Culture

.   Levy’s exploration of women’s self-objectification has only become more magnified withFacebook, YouTube and other media that allow us to broadcast our lives widely.  A greater openness and embrace of sexuality has freed women and girls. It’s also led to a culture where the fun picture a girl takes on her friend and posts on her facebook profile becomes fodder for predators on porn sites.  Last week, I read a story on the US Pole Dancing Competition. I could see the value of pole dancing as a sport that takes as much dexterity as many others BUT I it’s harder for me to reconcile its value as a “sport” when  the athletes (all incidentally women) are wearing 8 inch death heels and next to no clothing. We still need to have some critical conversations on the balance between liberation and self-exploitation. If the feminist movement can free itself from some of the strongholds of the past, it could be well-placed to start and lead the conversations.