When the Westboro Baptist Church decided to protest Gunn High School and instead of ignoring the Phelps, the students responded with such a heart warming protest.  Please watch the video and grab your kleenex first, don’t say I didn’t warn you. 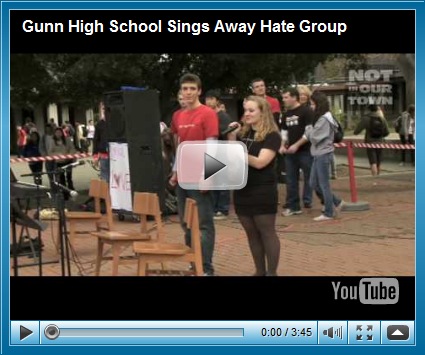 This is done basically just to demonstrate that Gunn is a loving and accepting place.   The gay straight Alliance once they found out they actually set up Facebook page and they invited all of their friends from all schools all in the Bay area and started the conversation that way online.  They decided as a group that they wanted to sing and when the administration decided that they want to plan a lunchtime activity they said great and we’ll sing there too.  They really have stepped up and set a leadership role and set the tone for the campus.

Noreen Likins (principal): “What we’ve done as a community is really talk about this ahead of time with an assembly on Tuesday so that students were prepared and I was able to talk to all of the students –  what to expect and what kind of organization they were  coming here.  I think that that has given them time to process and think about it in a way that if it had just been sprung on them would have been very hard.  I’m very very proud of the kids they did a super job”.

So I think what really affirmed today was what a positive learning environment we have here at Gun and how accepting everyone is.  You know I feel like a lot of people say the word tolerance but it’s not true we don’t tolerate each other until we accept each other. 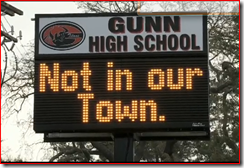 ….and a little child shall lead them

This has got to be one of the most heart warming displays I have ever seen, of a community coming together to fight intolerance.  There are times as a marginalized body that one becomes so tired, that it is hard to find the strength to keep fighting, and then something like this happens.  The students of Gunn are the next generation and it seems that they have truly learned from our mistakes. Thank you Gunn students and faculty, hope is such a valuable gift.