Larry King Took his Suspenders off with his Sister-n-Law

This is a guest post by Gemna of Gemna Speaks 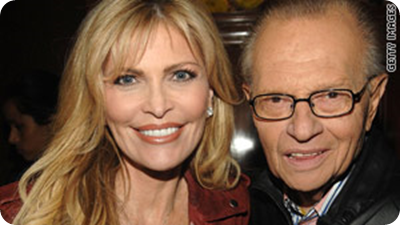 Oops, the word “allegedly” should be in the title of this story. Anyway, Larry King’s messy on/off, maybe/soon divorce from wife number seven, Shawn King, has turned nasty with allegations that he took his suspenders off with his wife’s sister. After the last several months of “breaking news” on other folks’ affairs, unsubstantiated rumours, gossip, tidbits, do tell me more type of talk show, 76 year old Larry King is not getting the 24 hours news coverage that CNN and other media outlets have given to a number of scandals over the years. But the media lack of covering one of their own who is now the center of a he said/she said war of words demonstrates how the media outlets choose the lives they pick apart.


"Larry King Live" is CNN's longest-running interview program. Premiering in June 1985 with its now-famous mix of interviews and topical discussions, the show features guests from across the gamut of business, entertainment and politics.


Guests from across the gamut are touted in the shows bio but The Larry King Live has found a special niche with salacious wall to wall coverage of couples breaking up or in trouble; Kate and Jon Gosselin, former New York Governor Elliot Spitlzer, Governor and Jenny Sanford, and can we not forget all things Tiger and Elgin Woods. Now what is ironic about the Tiger Woods coverage, Larry King was “allegedly” unsnapping his suspenders with his wife’s sister while he was asking detailed probing questions about every blonde bimbo that Tiger Woods “allegedly” texted or called. Larry King’s sister-in-law is blonde by the way. Looking back on the questions, Larry King was asking with more insight than most. With every detail about Tiger Woods life on the table for all to gawk about night and day, CNN has not done the same with Larry King who is making the front pages of tabloids at every checkout counter in the country. There has been no lead in stories with quotes credited to the National Enquirer or US Weekly. No updates from Andy Cooper about King. No bias, no bull statements from fiery Mississippi native Campbell Brown. No worst person list from Rick Sanchez with Larry King. However, on April 15th, when we were all distracted trying to get to the post office to postmark our taxes, Show Biz Tonight gives us this quick nugget:

Los Angeles, California (CNN) -- CNN talk show host Larry King and his wife, Shawn King, each filed for divorce Wednesday in Los Angeles Superior Court.
Both cited "irreconcilable differences" in their filings, but they disagreed over custody of the two children from the 12 years of marriage.
He wants to share legal and physical custody of the boys with her, but she is asking the court to grant physical custody to her alone. The Kings have two sons, ages 9 and 11.
"His major concern is for the children and beyond that he will have no further comment," Larry King's publicist said in a written statement.
Shawn King's lawyer did not immediately respond to CNN's request for comment.
The documents said the couple separated on Tuesday, the same day Shawn King signed her papers. Larry King's signature was dated Wednesday. Both petitions were filed Wednesday.


Larry King’s scandal has been absent of nightly interviews with the butler, fired nannies, and former girlfriend’s cousin hairstylist neighbour who spoke to someone briefly eleven years ago. The media that creates sensationalism daily has gone death, blind and stupid when one of their own is really being sensational! The hypocrisy is more snark than this blogger can bear.

Larry King is not the only national media name that has been caught with his suspenders off that made his trousers fall down around his ankles. Tiki Barber, the NBC Today correspondent, is making the news as well. But at least NBC is not ignoring the troubles with their ex-Giant football star turned morning show reporter that has left his wife of 11 years for a former NBC college intern (she is blonde also). NBC has reported on Tiki Barber’s circumstances briefly. Tiki Barber issued a statement about the situation:

"After 11 years of marriage, Ginny and I have decided to separate," Barber said. "This decision was a painful one, but we are moving forward amicably and will continue to work together to raise our children with the love and dedication they have always known."

He does not mention his wife is eight months pregnant with twins and his 6 and 7 year old sons in the statement. Wasn’t Tiger Woods children mentioned nightly? What is surprising about the crafted wholesome value club spokesman, Tiki Barber, has spoken publicly about his hatred of his philandering father who left his mother and family. In 2006, Tiki Barber made this statement about his father:


"Not only did he abandon her, I felt like he abandoned us for a lot of our lives. I have a hard time forgiving that."


Tiki and his twin brother were four when their father left the family. Now I am not trying to stir up any more mess than normal, but it appears that Tiki might need serious counseling. We know from real people with real life experiences unresolved hurts and pain from the actions of one generation will manifest in some form in the next generation. Now that bit of compassion you just read from me is not usually stated when news folks like CNN and NBC stand outside troubled family homes night after night reporting the ugly details of public and private individuals lives.

I am not wishing ill on the King or Barber family by any means. This is not a fun post to write about family conflicts. Each family has young children involved and I am sure a host of relatives and friends that are being thrown into this dreadful situation unwillingly. These families are dealing with private pain in the eye of the public for all to see and judge. Been there, done that. Since this is happening to two national media stars, hopefully all forms of the media will practice more restraint in how the lives of others in similar situations are reported in the future. Right now, we need real news to make a serious comeback. News without bias and slants and ready-made story lines. Leave the family break ups, cheating, whoring, lying, who hooked up with whom to the tabloids that are in the business of reporting gossip. With the shape our country is in right now, we, the people, are crying out for truthful reporting that is desperately needed from everyone one in the business of telling us the news.