The Men of True Blood?

I turned this title into a question because in “Detail” magazines photo shoot of The Men of True Blood, Lafayette is noticeably absent. 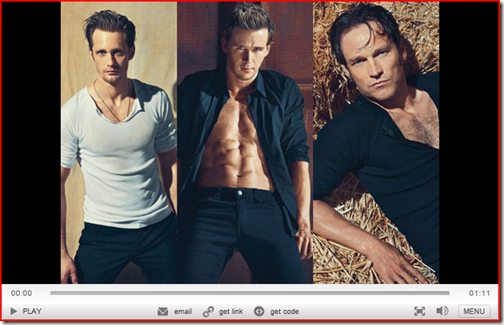 Click the image to watch the video.  I once again apologize for embedding difficulties.

It would make sense to me if Moyer and Skarsgard were the only two featured, because these are the two leading vampires in the series.  For the record, I am team Eric all the way.  Including  Ryan Kwaten and leaving out Nelsan Ellis is most certainly a slap in the face.  Jason is not more important to the two story than Lafayette and in fact, the character Jason is little more than annoyance whereas, Lafayette has delivered some of the more memorable lines in the series.  This bit of erasure is not cool and it smacks once again of White male hyper-masculinity at the cost of acknowledging the worth of people of colour. 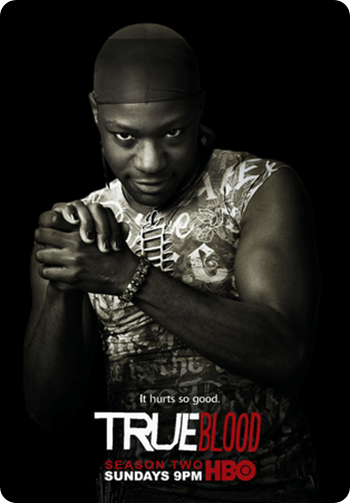 This is also alarming in light of the fact that Lafayette will be getting a love interest this season.   Kevin Alejandro will apparently be taking on the role of Lafayette’s leading man.  Lafayette is a character of little note in the book (trying to avoid spoilers) and therefore, the fact that the writers and produces have gone to this length to give him a growing storyline and now a lover, indicates to me that he is indeed one of The Men of True Blood.

And finally, in a display of absolute love for Lafayette’s hopelessly problematic character, I present you with some of my favourite lines.

"Scuse me. Who ordered the hamburger... with AIDS? In this restaurant, a hamburger deluxe comes with french fries, lettuce, tomato, mayo, and AIDS! Do anyone got a problem wit dat? Aw baby, it's too late for that. Faggots been breeding your cows, raisin' your chickens, even brewin' your beer long before I walked my sexy ass up in this mother fucker. Everything on your God damn table got aids. Well all you gots to do is say hold the aids here. Eat it! Bitch, you come into my house ,you gonna eat the food THE WAY I FuckIN' MAKE IT! Do you understand me? Tip your waitress."

"What the fuck is it with white people and Jello?"

"Oh my fucking God, girl! This is about to get ugly."

"I know every man, whether straight, gay, or George mutha" fucking Bush, is terrified of the pussy. "

“That boy is sex on a stick. I don't give a good damn how stuck up he is.”

“Don't get it twisted honey, I'm a Survivor first, a Capitalist Second, and a whooole bunch-a otha' shit after that, but a Hooka' dead last, so if I got even a Jew at an Al Qaeda pep rally shot at gettin' my black-ass outta this mutha' fucka', I'm takin' it; Now whatch' you wanna know?”

“Jesus and I agreed to see other people, don't mean we still don't talk time to time.” (note: this one is my absolute fav)

“They ain't scared of you child... they are scared about what's in between your legs”.

"Shit, y’all bitches don't know what you missing, I got six gears on these hips”.

Yep, Lafayette done said it, as the saying goes.