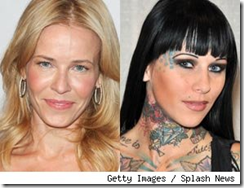 Michelle McGee, the alleged mistress of Jesse James got a little perturbed over the zingers that Chelsea Handler aimed at her.

On her blog Handler aimed a zinger directed at the 32 year old McGee in which she's quoted as stating, "I guess she doesn’t read magazines, which makes sense since she basically has one on her face.”

McGee sent retaliatory fire back at Handler courtesy of her Facebook page..

“Chelsea, heres some free advice..use some of that botox from your forehead and put it in your flabby underarm skin. Ive seen better wings in a bucket of KFC chicken,” she wrote.

Then Miss White Power 2010 went a step further and added: “In all seriousness, Im a big fan of Chelsea Lately…feel so honoured to have a transexual poke fun of me…”

No, you haven't had a transwoman poke fun at you until now. What I'm about to say isn't intended to be humorous like the pwning you've been getting from Chelsea. 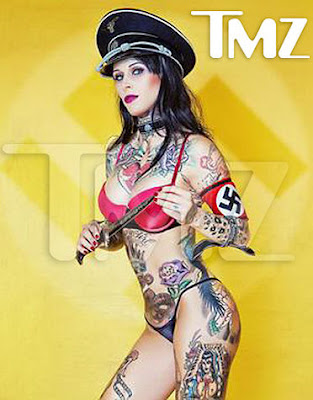 But if people find it to be funny, then that's all good.

Look, Eva Braun for the new millennium, whatever beef you have with Chelsea, leave the trans community out of it.

The trans community is more than a little sick and tired of cognitively challenged cispeople struggling to come up with zingers in dissfests in which they are hopelessly outclassed using transwomen as an insult.

As a matter of fact, I know more than a few transwomen who are better looking than you and don't have swastikas tattooed on their bodies.

I've got a salute for you, and it isn't a stiff arm one. It starts with my extended middle finger.