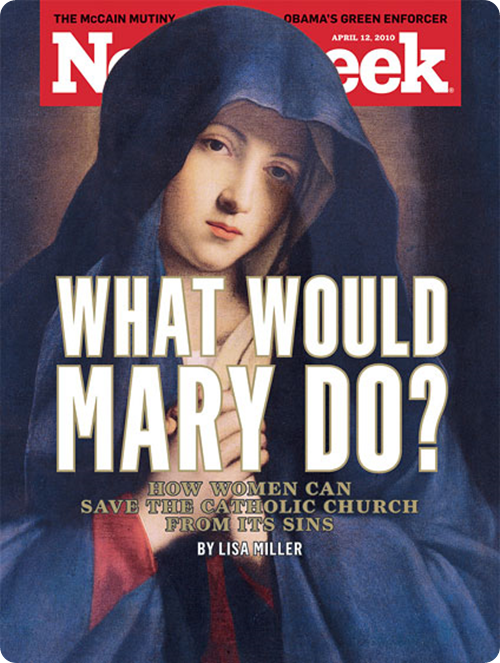 The above image is next weeks cover of Newsweek, which I saw over at Shakesville.  Liss does a wonderful job dealing with the issue of gender and sexism with this image, but when I saw it, I saw something completely different; I saw the erasure of the Brown and Black mother. This image is clearly Mary the mother of Jesus and therefore; the White skin is extremely off putting. Yes, I’m going to talk about race.

The White Jesus is what has become normalized because Whiteness is the racial body that exists with the most social power and therefore the conceptualization of God or for that matter a Goddess necessarily reflects Whiteness even though it is highly unlikely that this is an accurate representation.

Jesus was not White.  Process that for a minute. Jesus was not White.  How could he possibly be when he was born in the Middle East of Semitic descent?  He is described in Revelations as having hair like wool and feet like brass.  What kind man do you recognize as having hair like wool?  That is specifically a trait of dark-skinned people and it has been ignored to perpetuate to support the conceptualization of white as good, pure, and Godlike.

If Jesus was not a White man, then it stands to reason that Mary, his mother, was not a White woman.  Reclaiming the virgin mother as the dark-skinned woman that she most likely was is an important task, because today dark skinned mothers continue to be abused and then tossed aside like refuse.  The White mother has been placed upon a pedestal in order to uplift the fruit of her womb. 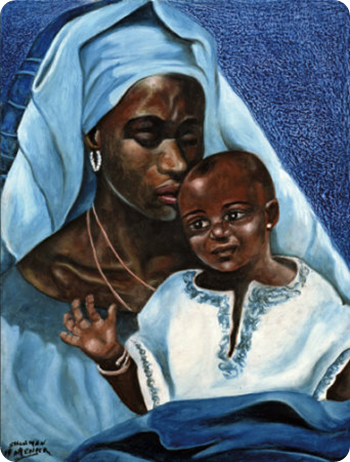 Our motherhood has long been disrespected and even as we wept bitter tears, our children have been ripped from our grasp never to be seen again.  We have been constructed as irresponsible breeders and our wombs have been made barren in order that the White mother and her White children should receive all that is good.

Mary is constructed as pure, kind and the epitome of goodness whereas; the Brown or Black mother is lazy, abusive, angry, lustful, dirty and decidedly unfeminine.  Black and Brown mothers have never been able to argue our status as mothers to protect us from the harshness of this world, because ultimately we are disposable.  Whiteness does not seek to see any generation of Brown and Black babies inherit any of the goodness, wonder or beauty, that is the earth and therefore; the assassination of the Black and Brown mother is a necessity.

I have broached this topic many times, and  I have been answered with, it does not matter what colour Jesus was and it does not matter what colour Mary was; it is the message and the legacy that are important. While I will not deny the message that God who became man bequeathed to the earth, the body that ze chose to inhabit is vitally important.  If this omnipotent being, chose a brown body, what does it say that so much evil has been perpetrated on those who share hir skin colour?  What does it mean that idols and statues are made to praise his mother and yet so few of them resemble the woman that she actually was?

Race is not divorced from any conversation, as much as Whiteness would have us believe that it is often irrelevant or that we seek to interject it too often.  Until the Brown and Black women can be legitimately celebrated, we will never be free because we are all children of our mother and the mother as it just so happens was at a very minimum Brown if not Black.  You cannot evolve beyond that which gives life because that is the source of all power and indeed all goodness.