Obama has a few Words for VA Governor on Slavery 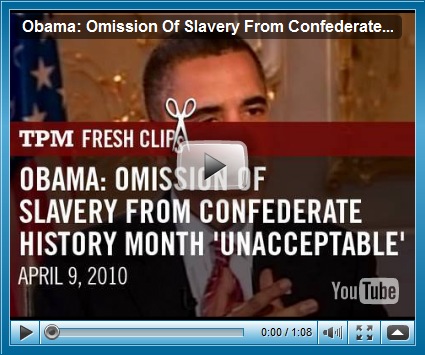 I’m a big history buff and I think that understanding the history of the confederacy and understanding the history of the civil war is something that every American and every young American should be a part of.  Now, I don’t think that you can understand the confederacy and the civil war without understanding slavery, so I think that was a unacceptable omission.  I think the governor has now acknowledged that and I think that it’s just a reminder that when we talk about issues like slavery that are so fraught with pain and emotion that we better do so thinking through how this is going to effect a lot of people and their sense of whether they’re part of a commonwealth or part of a brother society

On this I have to say that I completely agree with the president.   Those supporting the creation of this so-called remembrance without acknowledging the evil that slavery was and is (slavery is still occurring in the U.S., though it is illegal) have definite racial issues that they need to work on.  The idea that Whiteness needs to be proud and reminded of its accomplishments is ridiculous, when Whiteness is supported  by every single social institution.  Revisionist history is merely an attempt to secure this racial bias.

The emotional cost of constantly having to defend yourself is never acknowledged in these conversations.  If we don’t fight, Whiteness, like every other power in history will not be inspired to act in the cause of justice and yet each battle that we engage in zaps strength that is so desperately needed in other areas.  The fight is absolutely draining and yet, we can never have a moments peace because someone is always there to say I don’t get it, or why don’t you spoon feed the information because I am too lazy to look on google or go to a library.

Don’t quote Audre Lorde to show me how advanced you are.  Don’t point out that you have Black friends.  Don’t tell me that your favourite authors are all of colour and finally don’t speak about my people in a defeatist tone without ever acknowledging our amazing achievements.

Now that I have said all of this, the one certainty is that I will say that again because no matter how clear my argument or how forcefully POC fight, Whiteness is deeply ingrained in this society. It rolls through the streets like a flash flood devouring all in its path.