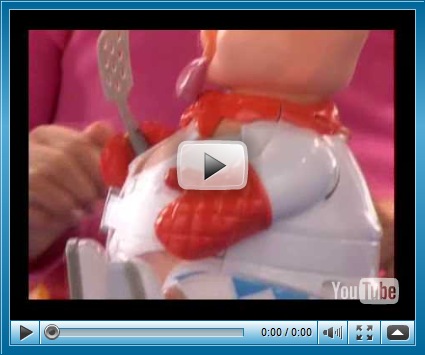 This little game is sold at Toys R Us.  Players roll the dice to determine how many hamburgers to feed the pig, whose stomach steadily increases with each hamburger.  Eventually, his stomach pops from overeating.  Funny ha ha ha. 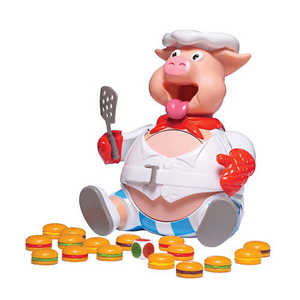 Look, I don’t like the idea of feeding an animal (notice how they chose a pig) until it explodes from way too much consumption.  This is hardly sending a positive message to children about food and fat bodies.  Though they may have been attempting to teach the lesson of everything in moderation, to me me it screams of people are fat because they just will not stop stuffing themselves.

I am also disgusted with the idea that the food of choice is hamburgers because everyone knows that fatties spend their day eating hamburger after hamburger, just trying to avoid exploding their disgusting fatness everywhere. The entire game is a metaphor for how disgusting and dangerous fatness is.

Apparently this game was one of the hottest selling toys last Christmas though I just saw the commercial for the first time today.  When we consider that we live in a culture of fat hatred this is no innocent game.

At the U.S Toys R US site the consumers did not complain about the bias that this toy teaches children, instead they focused on its functionality.  Yep, their upset that their nasty little fat hating pig didn’t explode properly.I think that this is very telling because it offers proof that many of the attitudes and behaviours that we claim to be naturally occurring, are specifically taught to children.

When a baby is born, they don’t care whether or not the person holding them is skinny or fat; they simply care about love and having their physical needs met. This toy teaches them from a very young age a negative understanding of their bodies and eating habits.  It says don’t indulge, don’t see food as pleasurable and in a world in which many women regularly starve themselves to maintain an unrealistic weight, this is hardly healthy.

If we want children to make good connections with food, we need to approach it with a sense of pleasure and not  a fear of stigmatization and sickness.   We must regain the celebration of life that eating truly can be.  Food brings families together, it commerrates holidays, as well as sustains our bodies. If we want to stop the un-healthy eating habits that we have come to embrace for the sake of unrealistic ideals, toys like this cannot be considered harmless.