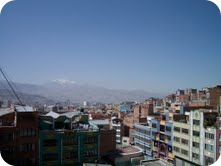 “Mucho gusto, or, nice to meet you”

I am very pleased to be joining Womanist Musings to talk about issues affecting women in Latin America. Since I packed my bags and moved to the region for the first time nearly 11 years ago, I’ve been deeply moved by the particular issues that women face in this area of the world.

Latin America has been marked by a history of exploitation: of indigenous populations, of African slaves and their descendants, and of women. Latin American women’s family, property, political, and sexual and reproductive rights have lagged behind those of women in many other regions of the world. The region’s specific brand of sexism—machismo—is largely still accepted as a normal part of everyday life. In the entire region of Latin America, abortion on demand is legal only in Mexico City and in Cuba, and divorce has been permitted in most countries for fewer than 25 years.

For the past ten years, most of my long-term trips to Latin America have taken me to the country of Bolivia, where I

conduct research on issues of women and gender in the cities of La Paz and El Alto. Bolivia is the poorest country in Latin America with the exception of Haiti, and over 60% of the country’s population is of indigenous descent. Because of my extensive experience in Bolivia, many of my posts to the site will center on that country, but I also plan to write about the situation of women in other areas of Latin America. Most of my postings will focus on women’s political and sexual and reproductive rights, and I will often use current events in Latin America as a springboard for talking about these issues.

I’m excited to be contributing to conversations about Latin American women here at Womanist Musings, and I hope you all will join in on the debate in the comments section!