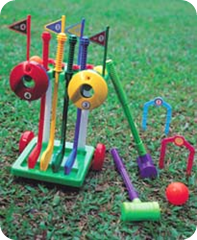 Last night we went to my neighbours for a bbq…Yeah, a night free of the unhusbands creations in the kitchen.  My neighbour has a nephew the same age as my baby Mayhem.  I sat sipping on a rum a coke (it’s not officially beer season) and watched them play.  They were both engrossed in their pick up game of golf that they had organized and were having a really good time.

I smiled an easy smile and realized that this uncomplicated relationship will not always remain this way; you see, my son is bi-racial and the other boy in question is White.  For now, both of them see race and difference, they simply do not apply any weight to it.  Each of these young boys will be shaped in different ways because the world will treat them very differently.

In time, the little White boy will come to realize that he is a member of the most privileged group ever to walk the face of the planet.  His manhood will not be questioned.  He will be able to walk into a store without people immediately fearing that he will steal something.  Before he opens his mouth, it will be assumed that he speaks English without utilizing slang.  He will not have to be taught to fear the police as a survival tactic.  He will walk through this world like he owns it. And why not, White masculinity has been trampling on the rights of others for a very long time.

When I saw this little boy playing, I saw the face of a future oppressor.  If his parents do not take the time to attempt to undo all of the messages that society will normalize for him, privilege will be as normal for him as breathing air and this will inevitably change the way he will relate to my son.

You see, no matter how close a person of colour is to a White person, race will always have a role to play in their relationship.  White people make assumptions about others based on the normalization of Whiteness that often has people of colour decoding their lives and explaining why such an action or statement is racist.  In fact, no matter how aware a White person is, at some point they will engage in some sort of racist behaviour that will hurt.  This is specifically because of the way that racism has become such a social norm.

I remember having a coffee with a friend of mine when she began to complain about the sexist treatment that she had received from some Arab men. Just as I was about to offer words of support she called them “sand niggers”.  To this day, my mind resonates with shock.  Here is a woman that has seen the door of no return and yet “sand nigger” easily fell from her lips.  While she had every right to complain about the sexism that she had received, racism is how she fought back and this is very much in line with the response many White people have when they feel marginalized.

A precious few are able to see the ways in which resorting to racism only perpetuates marginalization.  For the woman in question, she expected her race to be able to protect her from assault because Whiteness is a privileged class. When White people are wronged they always have race to latch on to and in that moment of rage, they reach for it quite easily because it is a well known equalizer. Using a racial epithet immediately changes the playing field and reduces the person of colour to a thing, an object to be reviled.

My little boy thankfully has yet to have a racial incident but the day is coming. My oldest was taunted at the age of five with children calling him brown boy.  I was not prepared to deal with this because I could not imagine children engaging in such racist behaviour at that young age.  I have learned a lesson from that and will soon prepare my youngest child to deal with what it is to be of colour in this world.  I must arm him and fill him with self pride, because these little friends that he makes today, could discover tomorrow the benefit of Whiteness at the cost of my child’s mental well being and self worth.