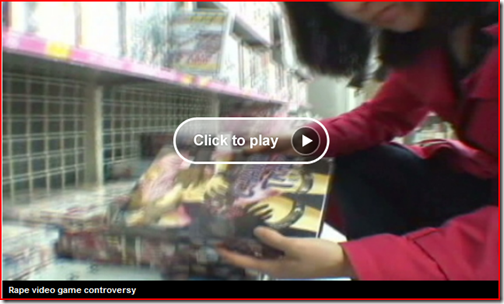 Just as the title suggests, RapeLay is a game about rape.  According to CNN, the game begins on a train platform and the object is to harass a young woman and eventually rape her.  Obviously, rape as amusement is absolutely horrifying and helps to de-sensitize the participant regarding the violence faced by women all over the globe.

In media reports, opposition has been framed as an effort to protect children and it has been understood  as some sort Asian attack on North American sensibilities.  It is more than reasonable to want to prevent children from engaging in rape as a form of play; however, to understand this as the work of the somehow uniquely perverse Japanese is clearly racist and limited.

This game may have been created in Japan, but rape culture is a global phenomenon because patriarchy is systemic internationally.   Prior to the invention of the internet, you didn’t need to travel to Japan to see rape culture, you simply needed to walk down any street in your hometown, or read a newspaper, listen to music on the radio, or watch an evening of television. Victim blaming is a daily part of life in the Western world.

Westerners have a tendency to frame oppression as something that happens elsewhere because they understand their society to be evolved and somehow removed from much of the violence and inhumanity that troubles the globe.  Consider the way that oppression against women is often constructed as something that happens to Muslim women because of the niqab. This totally ignores the fact that many women actively choose to dress modestly and or veil, as part of their religious practices.  How many times have people professed that real women’s oppression is something that happens in the Middle East?  Even some who speak about the horrendous rate of rape in the Congo, see this as phenomenon that is based in the savagery of Africans, rather than admitting that rape happens every minute in the West.

We should be outraged that Rapelay exists.  We should use whatever means possible within the law to restrict its sale and proliferation, but in so doing, we should acknowledge that violence against women does not solely exist in the culture of “others” .  This line of thought creates Western victims of violence and sexism as invisible, and further strengthens a damaging form of ethnocentrism  that serves to maintain a racialized view of humanity.

Whether it is the save the kids mantra, or a jingoist impulse to protect American trade, nothing justifies painting this as something those Asians do, regardless of the fact that many of these games originate in Japan.  Western capitalists are rewarded on a daily basis for exploiting women and for glorifying violence in horribly escalating forms.  When women complain about the ways in which the portrayal of violence is damaging, it is often silenced by those referencing sexism and violence in other cultures.  Saying “those people” gives westerners an excuse to ignore the ways in which no space is truly a safe space, if one is female in this world.